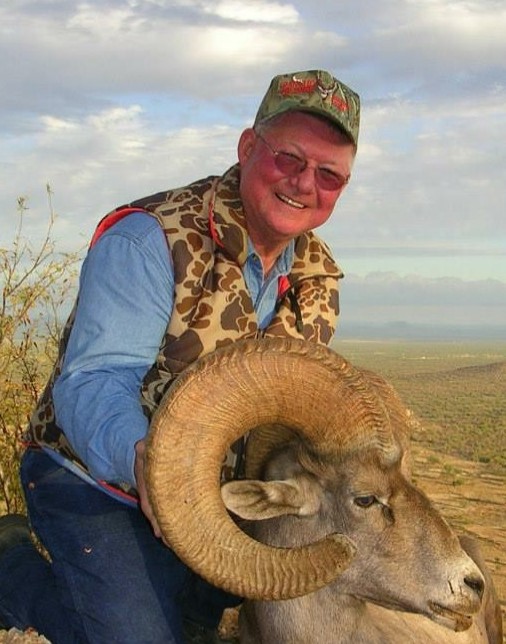 William Darrel Townsend III (Butch) of Newcastle, WY passed away August 26, 2021 at Monument Health Hospital in Rapid City, SD.    William was born in Newcastle, WY October 1, 1938 to Bill and Katherine Townsend. He was the 3rd of five children. Kay Linton, June Brown, Charles and Mark Townsend. He attended school in Upton and graduated in 1956.     William joined the Air Force in 1959, he was honorably discharged after four years of service to his country. He married Karen Sue Bock Aug. 6, 1961 while stationed in Alexandria, Louisiana. They had two children Curtis Townsend and Lori Kremke.   He attended Black Hills State College and graduated with a B.S. in business administration and a minor in Chemistry.  He was an avid hunter and conservationist. He supported many organizations including: Foundation for North American Wild Sheep (FNAWS), NRA, and the Wild Sheep Foundation. He was a charter member of the FNAWS and was always proud to be charter member #6. In 2007 Butch was able to complete his quest of a lifetime by harvesting a Desert Bighorn Sheep, completing his Grand Slam.  Butch additionally served on the national board of directors for the Wild Sheep Foundation.  William’s Masonic affiliations were extensive and began in 1968 when he was elected to receive his Masonic degrees. He was initiated, passed and raised to the sublime degree of Master Mason in Newcastle Lodge #13 on March 7, 1968. He was a dual member with Upton Lodge #38. He was Worshipful Master of Newcastle Lodge #13 in 1990-91 and Upton Lodge #38 in 1992-93. He was Most Worshipful Grand Master of the Grand Lodge A.F. and A.M. of Wyoming in 2013-14. He was inducted into the Red Cross of Constantine in 2013.  William was a member of a Sheridan Valley Scottish Rite and was a 32nd degree Scottish Rite Mason. He was a member of Gillette York Rite Chapter #17, Council #11, Commandry #13. He served as High Priest, Illustrious Master and Eminent Commander of those bodies respectively. He was a Shriner of Kalif in Sheridan and a member of Inyan Kara Shrine Club. He was also a member of the Eastern Star Chapter #13.  He served as Associate Guardian of Bethel #15 in Newcastle. Butch was associated with Townsend Company Inc. from its inception. In 1977 the Townsend Company Inc.  purchased the ranch from Johnson Bock Johnson on Beaver and Oil Creeks. Butch was manager of this ranch until its sale. He spent countless hours Improving this ranch. He built many miles of waterline, benefitting livestock and wildlife both.  He spent his birthday every year hosting antelope and deer hunters, developing many lifelong friends. He also served on the Governors Task Force & Water Development board during this time.  William was a loving and generous man. He gave of his time and financial support wherever needed. He loved his family, enjoyed travel with his wife Kathy whom he met, fell in love with, and married on July 7, 2007. He enjoyed the many organizations to which he belonged, had many projects and could fix or build just about anything. He was a patriot and an example of the kind of man that built this country. He will be remembered for his humor and kind heart.

Graveside services will be held at the Greenwood Cemetery in Newcastle, WY September 8 at 10:00 a.m. Pastor Ron Sample will be officiating.  Picnic provided by Methodist Women and Eastern Star following at Dow Park from 11-2. (Alternative inclement weather location for the reception will be at the Methodist Church.)  Visitation will be Tuesday September 7 from 3-7 p.m. where masks are optional, but we are asking for everyone to follow social distancing protocols. In lieu of flowers, memorials may be made to “Kalif Shrine Travel Fund,” Box K, Sheridan, WY  82801.  Please Call Meridian Mortuary for more information (307) 746-2986.

To order memorial trees or send flowers to the family in memory of William Townsend, please visit our flower store.