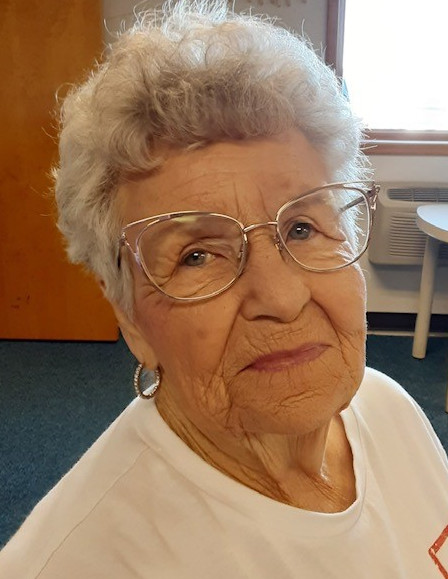 Peggy was born February 7th ,1938 in Wetumka, Oklahoma to Clyde and Ruby Rich. She had three siblings; two brothers and one sister.

Peggy was married to Minfred Smith in 1954, and together they had nine children. They divorced in 1981, and in 1986, Peggy married William Morris and gained two stepchildren.

She worked at the Processing Plant alongside her husband Bill until the business shut down in 1991. Peggy worked at Weston County Manor for many years before retiring in 2002. Peggy and Bill loved to square dance together and did so for many years. She also enjoyed reading, playing cards, attending church, yardwork, drinking coffee with family and friends, attending her grandchildren's sporting events, and taking on the role of treasurer in her Tops club. Peggy's greatest gift and joy in life was being a mother and grandmother. She always remembered all their accomplishments and forgot all their mistakes. One of her favorite quotes was "Family is not an important thing, it's EVERYTHING!"

Funeral services will be held Tuesday, October 11, 11:00 a.m., at First Baptist Church of Newcastle, 903 S. Summit Ave., in Newcastle. A reception to be held following the services at Weston County Senior Services. Services will be livestreamed at www.meridianmortuary.com . Condolences  can be sent to Meridian Mortuary, 111 S. Railway Ave., Newcastle, WY, 82701 or at www.meridianmortuary.com .

To order memorial trees or send flowers to the family in memory of Peggy Morris, please visit our flower store.