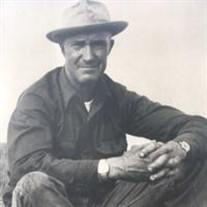 Walter Ernest Johnson was born in Long Pine, Nebraska on March 6th, 1926 to Frank Jelmer and Florence Mabel Davis Johnson. He attended 10 years of school in Manville, Wyoming then went to work as a farm and ranch hand to help his family make it through some tough times. He was also known to make a buck or two killing and selling rabbits. He tried to get into the army in 1943 but had to wait until after he turned 18. He was a Private First Class in World War II from 1944 to 1946. He was a PFC radio man with the 8th armored tank battalion, helping liberate the besieged city of Bastogne at the Battle of the Bulge alongside General George Patton.
Walter married his sweetheart, Barbara Lois Morrissey, on November 4th 1952. They had two sons, William and Daniel, who gave him two beloved daughters-in-law, Shawn and Sheri. While his sons and new daughters brought him much joy and pride, his greatest treasures were his 4 grandchildren: Brooke Ann, Amanda Jo, Megan Lynn and Matthew Walter.
Walter was no stranger to hard work, he worked for Updike Brothers for over 46 years on workover rigs and later on as a mechanic in the shop. After he retired, he continued to work and help repair on everything from railroad equipment to lawn mowers for Jim White and for friends and neighbors. He could often be found doing odd jobs and fixing things at the church or crossing off items on the never ending "honey-do" list. This list usually included juicing chokecherries and rhubarb for Barb's famous syrups and jellies. We always say that it just would not have tasted the same without his special juicing technique. The work that brought him the most satisfaction was building swing sets and a playhouse for his grandchildren.
He also served his church as an usher, as a Senior Warden for 4 years and as a Vestry Board member. Walter was proud to be involved in the annual pancake supper, where he served as the pancake cooker and helped build the current pancake griddle.
When it came to his grandchildren, Walter was one of the most gentle and kind men anyone could ever know. He was not afraid to sit in kids' furniture and have a tea party or let his grandchildren get him in trouble by writing all over him with markers.
He loved to be the taste tester to any of Barb's new recipes and NEVER left a plate empty. He could often be found tinkering at his work bench, watching basketball games or his new found passion UFC mixed martial arts. When asked if he we could get him anything, he would give you that funny little grin and say, "I could take a shot of good old Jack Daniels". While he tried many times to quit, he just couldn't give up his love of chewing, much to Barb's dismay.
Walter lived at the Weston County Manor for the last year of life and loved everyone that cared for him, just as much as they loved him. Some of the manor staff have shared some pretty comical "Walt & Barb" stories with the family.
He is survived by his sons - William of Newcastle and Daniel (Sheri) of Sidney, MT; daughter-in-law Shawn Zabka of Cheyenne; four grandchildren, Brooke of Cheyenne WY, Amanda of Vaughn MT, Megan and Matthew, both of Sidney MT; sister Doris Mae Rogers of Gillette WY; niece Shiela (George) Rhodes of Gillette; and brother Carl (Pat) Johnson of Panacea, FL.
He was preceded in death by his parents and his brother Johnny.
Walter passed away May 7, 2018, the same day that the love of his life, Barbara, was laid to rest. Just as they were inseparable in life, they are now together in heaven.
Memorials may be made in Walter's name to the Christ Church Episcopal Alter Guild or the Weston County Humane Society.

To order memorial trees or send flowers to the family in memory of Mr. Walter Johnson, please visit our flower store.