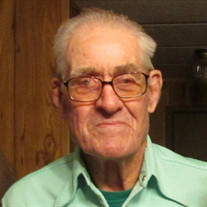 Vernon Dean Simmons went home to be with the Lord on Friday afternoon April 7,2017. He had been taking care of the spring fence repair on his ranch on a beautiful warm spring day. He had started his third pickup load of the old fence posts that he had gathered this week from along the fence row. He had completed all the fence repairs needed ahead of time. He had had a good day taking care of things, which is what he always did. However he was tired and he laid down in the front seat of his pickup to rest before returning home. This is where his family found him laying in his pickup parked on a ½ section pasture four miles from the house. He appeared to be peacefully asleep but he was now with the Lord as a young man of 30.
Vern was born on September 21, 1928 to Jay and Hanna (Harms) Simmons in their Sod House in Weston county ,Wyoming. His mother was attended by two mid-wives, Mrs. Clark and Mrs. Katie Hamm. In addition to his parents his family at the time of his birth was a sister Hazel and two brothers, Elvin William and Virgil Jay, who was also his best friend. His sister LuElla and brother Don were born later. Vern and Virgil had a remarkable childhood learning to ride horses, breaking broncs, and ranching and farming. They also learned the value of hard work and the lessons of responsibility that were essential to pioneer families in this wonderful new land called Wyoming.
Schooling was important to the family and Vern attended first grade in a school close behind the buildings of their family ranch, the next years a school two miles north and then with his siblings he attended the Fairview School District. The Clareton school was where they went to the eighth grade, which they took twice because their parents thought that would be enough school. However, Vern wanted to continue his education and earned enough credits to be graduated with the Newcastle High School class of 1946.
When his brother Virgil came home from serving in the U.S. Army during World War II, Vern and Virgil bought the Shook Place Ranch and a two ton truck, They started their business hauling coal and cords of wood to all school houses between Midwest and Sundance for the winter. They also hauled coal to ranches in most of Weston and Crook counties and Newcastle homes. Their business expanded to ownership of two rental apartments and a rental house in Newcastle.
On March 8, 1956 Vern and Anna Lane were married in Upton, WY at the Methodist Church. When Vern and Anna celebrated their 61st Wedding Anniversary on March 8, 2017 he announced to the gathering of family that he had a very good life and he felt like he had been on their honeymoon all this time.
Not long after their marriage Vern and Virgil bought a farm together near Nisland, South Dakota on the Belle Fourche Irrigation District. Virgil and his wife Eleanor moved there while Vern and Anna were on the Jay and Hanna home ranch. The fall of 1959 Vern and Anna purchased the Florence Hamm Ranch and moved there to live. They were busy rebuilding the fences and buildings on this property. It was at this time that Vern perfected his Simmons fence corner which consisted of one post and a deadman. He was proud of this construction and often he said that even his grandchildren would not have to replace these. Vern and Anna bought the Elk Mountain ranch with a forest service permit and for 30 years hauled cattle for the summer up there on the Teepee cattle allotment.
Vern was a responsible man, a hard worker and always kept busy looking after his cattle and completing his fence work, often even before the repairs were needed. However he did like to take the time to visit with his neighbors. In addition to taking care of his home, ranch and family, Vern felt a strong obligation to contribute to the community where he lived. With this in mind Vern spent 25 years serving on the ASCS County Committee, 10 years as a 4H Leader, and 5 years serving on the FHA Committee.
Family was important to Vern and he especially liked to visit the Simmons Family Reunion in August in Eastern Nebraska and Kansas on alternate years. Also he enjoyed Ann's Family Reunion in June 2016 in Western Nebraska.
Vern leaves a wife of 61 years, Anna Lane Simmons of the family home, a son Joseph and Michele Field Simmons of Rural Weston County, WY, a daughter Jacqueline and Keith Parks of Newcastle, grandchildren Jason and Marie Simmons of Tempe, Arizona and Ashley and Dennis LaRoche of Rural Weston County, WY. He is also survived by brother Don Simmons and friend Karen Abbas, of Rural Weston County sister in law Eleanor Simmons of Newell, South Dakota, and many nephews and nieces of local Wyoming, South Dakota, Montana, California , Colorado and a host of good friends and neighbors.
Preceding him in death were his parents, brothers Leo, a child of 6 months old, Elvin and Virgil, sisters Hazel Simmons Niemcyk and LuElla Simmons Mahoney, brother in laws Gene Mahoney, Felix Niemcyk, Albert Niemcyk and nieces Linda Simmons and Jamie Emmert Mattison.
The Worden Funeral Home of Newcastle, Wyo.is in charge of the Services to be held in Newcastle at the First United Methodist Church which will be held on April 15,at 2:00 P.M. Visitation will be held at the Methodist Church 10:00 AM to 2:00PM. Memorials may be made to the 4-H clubs of Weston County, WY. Burial will be at the Upton Greenwood cemetery at a later date. A reception will be held at the Senior Citizens Center of Newcastle WY immediately following the funeral services

To order memorial trees or send flowers to the family in memory of Mr. Vernon Simmons, please visit our flower store.