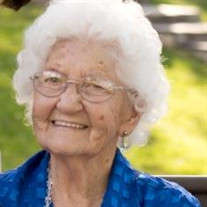 Wilma "Billie" Wakefield, 92, of Upton, WY, passed away Tuesday, March 1, at the Close to Home Hospice House in Gillette, WY.

Billie, the youngest of five children, was born January 20, 1924, to Benjamin and Ella Long in Upton, WY, where she grew up, attended school, and lived most of her life. As a young girl, Billie played on the Upton girl's basketball team, played trumpet in the band, belonged to Pep Club and Glee Club, and participated in 4-H. Billie dropped out of school her senior year, after meeting and marrying the love her life, Harvey "Bud" Wakefield.

Billie and Bud were married on August 26, 1941 in Harding, MT. They started their lives together living in Upton, until 1963, when they moved to the family ranch outside of Upton. Billie was a homemaker, wife, mother, rancher, and bookkeeper for their trucking business, Wakefield Trucking. In 1953, while raising her family, Billie earned her GED. In 1986, Billie and Bud moved back to Upton, where they lived out the rest of their days.

Billie was never one to sit still. Throughout her life, Billie was a part of several organizations and clubs. She was an active member in the United Methodist Church; served as a Girl Scout leader; and was a long-standing member of Eastern Star, twice serving as past worthy matron. In 2006, she was nominated by the Methodist Church, and won the Quiet Disciple Award. She enjoyed gardening, cooking, and bowling in a league. She was also an avid golfer. At the young age of 70, Billie got her first of two holes-in-one, earning her a coveted gold putter! On the rare occasions she did sit still, she enjoyed knitting, crocheting, playing the piano, writing, and playing cards. Billie loved spending time with her family and never passed up an opportunity to play with her grandchildren and great grandchildren.

Services will be held at the United Methodist Church in Upton on Monday, March 7 at 2:00 p.m. Burial will be at Greenwood Cemetery in Upton.

The family suggests memorials to the Upton Ambulance Service and the United Methodist Church.

To order memorial trees or send flowers to the family in memory of Mrs. Wilma Wakefield, please visit our flower store.