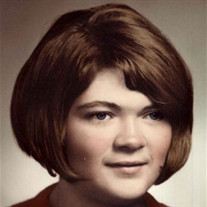 Visitation will be held on Thursday, May 8, 2014, from 4-7 p.m. at Oakcrest Funeral Services in Bancroft. Funeral services will be held at 2:00 p.m. on Monday, May 12, 2014, at the Upton Community Center in Upton Wyoming. Burial will be in the Greenwood Cemetery in Upton, Wyoming.

Vicky Marie Boyles was born April 11, 1950, in Newcastle, Wyoming, the daughter of Gordon and Patricia (Waldron) Van Offeren. She grew up in Newcastle and where she also attended school. After graduating from high school she worked at Joe's Food Center.

She was later married to William Moots in February of 1970, in Upton, Wyoming, and to this union two sons were born, Patrick and Michael. William and Vicky were married for 16 years before his death. Vicky remained in Wyoming and was later united in marriage to Everett "Lee" Boyles on May 25, 1991, in Upton, Wyoming. They remained living in Wyoming until moving to Ledyard, Iowa, on August 27, 2005.

Vicky enjoyed reading, traveling, doing cross-stitch, working her daily crossword puzzle, listening to music and being a back seat driver. She loved chocolate and had a knack for tasting food and being able to figure out all the ingredients that were in it.

Vicky died Thursday, May 1, 2014, at the Kossuth Regional Health Center in Algona, Iowa. She was 64.

She was preceded in death by her first husband, William Moots; father; step-father; a grandson, Gordon; a granddaughter, Roberta; a niece, Erin and a nephew, Brandon.

To order memorial trees or send flowers to the family in memory of Mrs. Vicky Boyles, please visit our flower store.