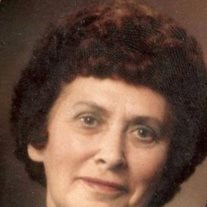 Mary Alice Watt of Upton, WY died Sunday March 2, 2014 at Weston County Health Services. Funeral services were held at 10:00 a.m. Friday, March 7th at the Upton Community Center with Rev. Sharee Johnson officiating. Burial followed in the Upton Greenwood Cemetery under the direction of Worden Funeral Home Directors. Those wishing to pay their respects did so at Worden Chapel in Newcastle on Thursday, March 26th from 5:00 p.m. to 7:00 p.m. The family prefers memorial contributions to be made to Lifeline (Medical Alert) @ Weston County Health Services.

Mary Alice Fullerton Watt was born December 14, 1922 to Robert and Mary Fullerton in Atkinson, NE. She was the youngest of 8 children. Mary Alice attended country school until the eighth grade and graduated from Atkinson High School in 1940. On June 1, 1943 she married Earl Watt of Upton, WY. They started their life together in North-western Weston County on the family ranch, in later years they resided in Upton. Children were the next big event to follow in Mary Alice's life beginning with the births of her children: Karen (Hudspeth), Phil Watt, Cathy (Grekoff), Don (Watt), Steve (Watt), Lynnea (Prell), and Joe (Watt). Through the years Mary Alice was bless with 23 grandchildren, 24 great grandchildren, and 3 great-great grandchildren.

She loved to cook and bake and was well known for her beautiful wedding cakes and pies. She could get a lot of work done, for her, with the promise of making someone a pie. She even had her recipe for Jalapeno Bread published in a cooking magazine.

Mary Alice was a 29 years member of The Order of Eastern Star and a 50 year member of Beta Sigma Phi Sorority. When someone was in need, she was always there to lend a hand.

Mary Alice is survived by her grown children and their families, Brother-in-law Bruce Watt and Sister-in-Laws Norma June Watt and Lucille Watt. She was preceded in death by her husband Earl, her parents, 4 brothers, 3 sisters, and 2 grandchildren

To order memorial trees or send flowers to the family in memory of Mrs Mary Watt, please visit our flower store.