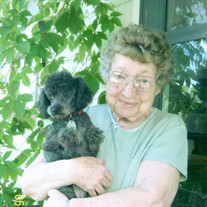 Mary Duca, 88, died peacefully at her Upton home on Tuesday, October 7, 2014.
She was the youngest of five children, born June 9, 1926 in Gillette, Wyoming to Guy and Jessie Thompson.
Mary was raised in Hardin, Montana for a few years, while her father was employed with CB&Q Railroad. They later moved to Upton where she met the love of her life, Jack Duca. After a short romance, Jack proposed while at boot camp in California. They were married March 2, 1936 in Sundance, Wyoming and honeymooned in Spearfish, SD, after a crisp drive in the back of a rumble seat. Later, Mary followed Jack to California and Florida airbases, living off base and working in officer's canteens to be near her man.
In 1945, Jack returned his bride to Upton to stay with her parents. While he was in New Jersey for combat training, their first child was born. After the war was over Jack was able to join his family in early 1946. Mary and Jack lived happily together for sixty nine years.
Mary had a friendly home where all kids in town passed through on their way to the football field. They helped themselves to the home-baked goodies and always came back for more. She enjoyed being a leader for Cub Scouts, Brownies and 4-H groups.
Summer times were spent growing a large garden and family vacations trips to the Big Horns, Yellowstone and Teton Parks. Occasionally they ventured other places like Montana and visited earthquake damage in Idaho and frequent trips to a Nebraska farm and visited family.
Mary was a stay-at-home mom while raising her five children. Her hobbies included the care of her family, becoming a wonderful cook and skilled seamstress. She sewed clothes for her children and later in life crocheted afghans for her children and grandchildren.
She was preceded in death by her parents, her husband Jack, a son Steven; sisters Mabel James, Gladys Gupton, Dorothy Rankin; brother Don Thompson; grandson Johnny Faxon.
Mary is survived by four living children, Linda Faxon, John (Dee) Duca, Mark (Cindy) Duca and Wendy (David) Strong; many grandchildren, great grandchildren, great great grandchildren, nieces and nephews.
Visitation will be Friday, October 10th from 4:00 Pm to 5:00 PM at Worden Chapel in Newcastle. Funeral services will be Saturday, October 11th at 10:00 AM at Upton United Methodist Church with Rev. Sharee Johnson officiating. Burial will follow at Upton Greenwood Cemetery. Worden Funeral Directors of Newcastle have been entrusted with the arrangements. Pallbearers will be Jody Faxon, Keith Strong, Ryan Duca, Levi Duca and Chad Duca. Honorary bearers are Jack Faxon, David Strong, Pudge Fagan, Don Holmes and Greg Nivens.
In lieu of flowers the family has asked that memorial contributions toward the Upton Senior Center or Upton Ambulance Service. Contributions may be mailed to Worden Funeral Directors, Box 627, Newcastle, WY 82701.

To order memorial trees or send flowers to the family in memory of Mrs. Mary Duca, please visit our flower store.