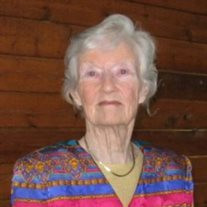 Known as Peggy to her family and friends she lived a full life that began with a modeling career in New York City. While not working she enjoyed sailing, single-handed, on Long Island Sound. Her love of walks by the ocean, and swimming, would be two of her favorite pastimes throughout her life. While working as a buyer in the fashion industry she and John married in 1947, and shortly thereafter began their family which was to include five children.

While her husband's profession as a civil engineer took the growing family to various cities and towns in America, Peggy showed her strength and dedication by keeping everything running smoothly at home. Perhaps Peggy's biggest challenge was a three year posting for the entire family in Brazil. While John was off to work Peggy was at home with five children, figuring out the day to day trials and tribulations of living in a different culture with a new language. These travels must have agreed with her, as she and John continued the lifestyle after the children had grown up and moved on. They retired and moved from New York to Florida, and traveled north every summer to their cottage on Prince Edward Island. Peggy particularly enjoyed the trips to her ancestral home in Ireland, and to the Catholic shrine at Medugorje in Yugoslavia. Regardless of where they were living, visits with the children/grandchildren were always special events.

When her husband's health declined and help from family was needed, she moved to the Black Hills of South Dakota. Peggy embraced this challenge, and she took up residence in Rapid City. Although the ocean was not nearby, Peggy always found a time and a place to swim, and she also found a church that celebrated the mass in Latin. A 90th birthday party was held at her apartment complex, pool-side of course, and was attended by all of her children and her many friends.

Peggy's health convinced her to make the move from Rapid City to the Manor in Newcastle, Wyoming in May of 2010. While living there she charmed many a staff member with that twinkle in her eye, her always ready smile, and her indomitable Irish spirit to carry on. Peggy was a devout Catholic and a prayerful, spiritual person. She will be remembered for her eye for fashion, and love of family.

She is survived by her children John of Custer, SD, Paul of Albuquerque, NM, Anne of Spring Valley, NY, Meg of Portland, OR, Mary of Custer Highlands, SD, thirteen grandchildren, and two great-grandchildren. In lieu of flowers please make donations in her name to the Weston County Manor in Newcastle, WY. Services will be held at Corpus Christi Catholic Church in Newcastle, WY, on April 11 at 10 AM with internment, next to John, at the Black Hills National Cemetery near Sturgis following at 2:30 PM. A rosary service will be held at the church the night before at 7PM.

To order memorial trees or send flowers to the family in memory of Mrs. Margaret Roland, please visit our flower store.