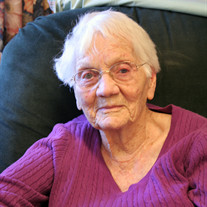 Lois Ann Crow, 99, of Newcastle, died on April 25, 2014, at Weston County Manor in Newcastle.
She was born on Dec. 22, 1914, at the family farm near Logan, Kan., to Frank and Effie Nichol.
She married Donald F. Crow in 1939. They settled first in Wray, Colo., and then later in Cheyenne. She volunteered for the Red Cross during World War II and then at DePaul Hospital as a physical therapy aide. Eventually she was employed in that department.
In 1972, she and Don moved to Denver, Colo., where she continued her volunteer work at the Children's Hospital and the Denver Zoo.
In later years, she entered assisted living in Denver and eventually moved to Newcastle to be near family and live at the Manor.
Lois is survived by her children, Kate Buteau of Cheyenne, Patrick (Barbara) of Newcastle, and Donald Bruce of Patterson, N.J.; five grandchildren, Kate's sons, Rene (Jessica) Buteau, of Cheyenne and Tommy (Dionne Douglas) and their children, daughter Imani Rose and son Ijaze Kingston Buteau of Ft. Collins, Colo.; Pat's daughter, Ellen Crow of Boston and son David Crow of Ft. Drum, N.Y.; and Bruce's son, Charlie of Patterson, N.J.
She was preceded in death by her parents; her husband; and her four siblings.
Friends may contribute to Weston County Manor, a�... Weston County Health Services Foundation, P.O. Box 821, Newcastle, WY 82701, or to a charity of their choice.
Cremation has occurred and a private family service will take place later.


To order memorial trees or send flowers to the family in memory of Mrs. Lois Crow, please visit our flower store.