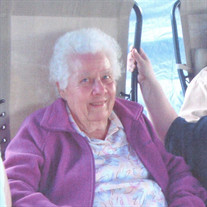 She was born along with her triplet sisters on November 30, 1923 in Washington, Kansas to Lester Porter and Faye (Blocker) Potter. She graduated High School in 1941 in Ogallala, Nebraska. While going to school she worked in her parent's grocery store and was a member of the girl's basketball team.

On July 12, 1942 she married John Daigh and Ogallala, Nebraska. The couple traveled from one coast to the other until John got out of the services in 1945. They stayed in Nebraska for a few years and then moved to Wyoming when John went to work for Continental Oil Co. for 34 years. They retired in 1983 to Newcastle, WY.

She was a lifetime member of the VFW Auxiliary. She enjoyed camping and get togethers with her family and friends, going south for the winter, picture puzzles and doing embroidering.

Cremation has taken place. Burial will be at Black Hills National Cemetery near Sturgis,

To order memorial trees or send flowers to the family in memory of Mrs. Iline Daigh, please visit our flower store.