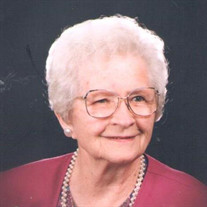 Genevieve I. Roan, 103, passed away on November 4, 2017 at Weston County Manor in Newcastle, Wyoming.

Gen was born on September 28, 1914 at the ranch home of her parents, Mike and Severa (Pzinski) Koski, near Horton, Wyoming. Gen joined two older sisters, Valorie and Martha. After Gen's birth siblings Michael, Victoria, Dorothy and Kathryn joined the family. The Koski family lived on a farm near Four Corners, WY and she attended Rockwell School for one year. The family home burned down and after living with Gen's grandparents, Stanislaus and Genevieve Pzinski for a short time, the Koski's then moved to Newcastle in March, 1921.

Genevieve attended school in Newcastle until graduating in May, 1934. She worked in private homes from the time she was in 7th grade until she graduated. After graduation Gen entered nurses training at the St. Joseph's School of Nursing in Deadwood, South Dakota, graduating as a Registered Nurse in June, 1937. She was employed for 6 months as night supervisor at the Deadwood hospital before moved toWheatland, WY. While nursing in Wheatland she met and married Jarvis H. Judd in Custer, SD on August 16, 1938. To this union five children were born. The family moved to Laramie, where Jarvis was killed in a motorcycle accident in 1946.

In June 1947, Genevieve packed up her five children ranging in age from 7 yeas to 6 months old and moved back to Newcastle. Genevieve worked at a privately owned hospital in Newcastle until the new hospital was completed in 1949.
Genevieve married Ralph Roan February 16, 1950 and to this union one son was born.

Genevieve continued to work in the nursing field until she retired in 1979. After retiring, Gen and Ralph spent their time in the vegetable garden and tending to their beautiful flowers. Ralph passed away in April, 1985.

Genevieve always found time to volunteer for various organizations throughout her life. Her children's activities and schooling were very important to her. She was room mother, assistant Girl Scout Leader and Cub Scout Den Mother. She was a member of the Gateway Gal Homemakers, later to be called Artful Gals, VFW Ladies Auxiliary, Buddy Poppy distribution, instrumental in forming the Senior Citizens Center, Charter member of the AARP Chapter 2488, took blood pressures at the Senior Citizens Center and delivered meals on wheels. Council of Catholic Women, Newcastle Chamber of Commerce, Beta Sigma Phi Woman of the year in 1982, called Bingo, Fancy Workers. Newcastle High School All School Reunion Committee, blood draws, health fairs, Safety Program for the Newcastle Police Department, and tree planting at the Newcastle Children's Center just to name a few. First and most importantly, Genevieve was proud of her Catholic faith, which was always a great part and comfort in her life. She was so proud that in "her" pew every week sat five generations of her family. Next to faith, you would not find a more patriotic woman. Her love of God and Country were evident in every aspect of her life. Gen truly gave herself, fully to her church parish and community.

Rosary will be held Thursday, November 9th at 6:30 P.M. atCorpus Christi Catholic Church in Newcastle,Wyomng. Mass of the Christian Burial will be held Friday, November 10th at 10:00 A.M. at Corpus Christi Catholic Church in Newcastle, with Fr. Tim Martinson officiating. In lieu of flowers, the family asks for donations to Weston County Senior Citizens Center.

To order memorial trees or send flowers to the family in memory of Mrs. Genevieve Roan, please visit our flower store.