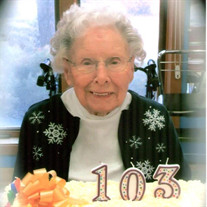 Newcastle resident, Eva Stubbs, died peacefully in her sleep June 26, 2015. She will be laid to rest with a graveside service next to her husband and father of her children, Leo Cummings, in Laramie, Wyoming.
Eva Stubbs was born Eva Johanna (Jeanette) Lappe on a farm near Elgin, Nebraska, to Adam William Lappe and Edith Ida Kadiera Lappe January 31, 1912; but she always celebrated her birthday on February 1st.
Eva graduated from Elgin High School in 1929 and graduated from Hastings Business College in 1930 where she worked for her board and room. After graduating college, Eva joined her family on the ranch three miles from the Horton Post Office and halfway between Newcastle and Sundance.
Eva met James Leo Cummings, and they were married on April 2, 1934. To this union, three daughters were born. Jeanette Mason Baker (Bill), Judy Statler (Glen), and Margo Rhoades (George). The young family lived in Newcastle and moved into their new home at 123 East Winthrop on November 26, 1939. Leo died in a boating accident on Lake Hattie near Laramie on April 26, 1966.
Life is like a book. When one chapter closes another begins. Old friends and widowers Bob Stubbs and Eva Cummings were united in marriage August 1, 1970. The couple spent winters in Yuma, Arizona and summers in Newcastle. After Bob's death, Eva had many more years traveling between Yuma and Newcastle.
At 90 years old, Eva moved into Mondell Heights and at 95 she became a resident of the Weston County Manor where she lived until her death. She is survived by her daughters Judy Statler (Glen) of Fargo, North Dakota and Margo Rhoades (George) of Gillette, Wyoming; eight grandchildren, 18 great grandchildren, and two great-great grandchildren. Eva was preceded in death by her mother and father, Bill and Edith Lappe; brother, Maurice Lappe; sister, Helen Dinslage; husbands, Leo Cummings and Robert Stubbs; daughter, Jeanette Mason Baker; and son-in-law, George Rhoades.
The family would like to thank Eva's health care providers, doctors, dentists, and all of the staff at Weston County Health Services and the Manor for their loving concern and care of our Mother and Grandmother. Our thanks go to the many volunteers and dear friends who have made it possible for Eva to stay in the community she loved. Thank you for your many visits that have made our Mother's life so busy and full. Thank you also to the Corpus Christi Catholic Community. Mother's faith was a vital part of her life.
Memorials may be sent to the Weston County Health Care Foundation or to Corpus Christi Catholic Church.
Worden Funeral Directors are in charge of arrangements.


To order memorial trees or send flowers to the family in memory of Mrs. Eva Stubbs, please visit our flower store.