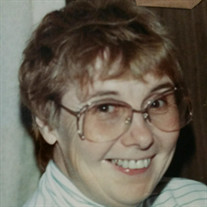 . A memorial has been established with funds used to help Weston County Humane Society in Newcastle, Wyoming. Ellen Wilhelmine Bailey, 79, of Upton Wyoming passed away Monday August 21st following a short illness at Close To Home Hospice in Gillette, Wyoming. She was born in Bad Soden, Salmunster, Germany to Otto and Dora (Katherine Dill) Neubert on July 18, 1938. Eventually she met US Serviceman Lloyd Bailey Jr. while he was stationed in Gelnhausen, Germany. They married on July 16, 1959 in Bad Soden and subsequently moved to Colorado where Lloyd and Ellen raised three children, Lloyd III, SuEllen, and Dale.
After a brief time in Arizona and South Dakota, they settled in Upton Wyoming where in 1990 Lloyd assumed the role of Superintendent of Upton School District #7, finally retiring in 1998. They spent their retirement in Upton Wyoming.
Ellen loved to knit, garden, and living a healthy lifestyle including running a 10k on her 60th Birthday. Most of all she loved spending time with her grand and great-grandchildren.
She is survived by her children, Lloyd III (Barb) and his three boys Christopher, Alec, Graham all of Freeland MI; SuEllen (John) Strong and her three girls, Debbie Messmer of South Dakota, Melissa Ragsdale of Casper, WY and Jenny Strong of Cheyenne, WY; and youngest son Dale (Deborah) and his three children Ryan of Ellensburg, WA, Michael (Bonnie) of West Haven, Utah and Hannah of West Richland, WA. Also surviving her are six great-grand children; Jerex, Teagyn, Brecklyn, Kayne, Olivia and Deacon.
A celebration of life was held on Saturday August 26, 2017 at the Upton WY Senior Citizen Center.