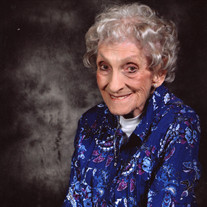 On February 23, 2017, the Lord called home an angel, Dorothy Marie Draper, 94 of Shoshoni, WY, passed away at home. Viewing will be at 10:00 am, services at 10:30 am Wednesday, March 1, 2017 at LDS Church in Newcastle, WY. Interment will follow at the Greenwood Cemetery with a dinner to follow at the church.
Dorothy Marie Anderson was born November 19, 1922, in Fairfield, Iowa to Raymond Alfred and Pearl Esther Glee (McCleary) Anderson. She was raised in Fairfield and started kindergarten at the age of 4 and completed high school at the age of 17. She was in the first class to graduate from the "new" high school as the old one burnt down.
She worked as a waitress at the Turner Hotel in Fairfield in 1940, she then worked as an assistant in an ear, nose and throat doctor's office in 1941. When WWII broke out she went to Rock Island, IL in the arsenal division and worked at Douglas Aircraft in Santa Monica, California from 1944 through 1945. While she was in California she enjoyed dancing at the Lawrence Welk's Aragon Ballroom and going to Santa Monica Beach. After the war, she worked as a telephone operator in Fairfield, Iowa.
After coming to Wyoming for a visit, she met the love of her life, Boyd Draper. He swept her off her feet as the handsome Wyoming cowboy of her dreams. At the age of 24, she married Boyd on November 12, 1946 in Newcastle, WY. To this union, two daughters were born, Amy and Linda. She lived in Osage, WY until 2011 when she moved to Shoshoni, WY.
She was the secretary of the Women's Club in Osage, WY during the 1960's, belonged to the VFW Auxiliary. She devoted her life to her family, she was a great mother and grandmother. She was a member of the church of Latter Day Saints.
She enjoyed crocheting, knitting, dancing, cooking, bowling, sewing, reading, picnics, movies, and church. She loved visiting friends and being with her grandchildren. Especially, taking them to the movies and rollerskating.
She is survived by her daughters, Amy (Raymond) Douglas of Osage, WY, Linda (Hoot) Crichton of Shoshoni, WY; sister-in-law Winnie Fish of Hillsdales, MI; grandchildren Cameron (Kami) Douglas of Ramona, CA, Tammy (John) Bird of Osage, WY, Lori Johnson of Oklahoma, Monte Crichton of Reno, NV, Melanie Crichton of Brunswick, GA, 17 great grandchildren, 2 great-great grandchildren, numerous nieces and nephews.
She was preceded in death by her parents, Raymond and Pearl Anderson; husband, Boyd Draper; brother, John Anderson; sister, Colleen Van Drimmelen; great granddaughter Abbygail Crichton.
Services are under the direction of Worden Funeral Directors of Newcastle and the Davis Funeral Home of Riverton.

To order memorial trees or send flowers to the family in memory of Mrs. Dorothy Draper, please visit our flower store.