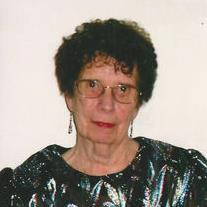 LaDora McPeters passed away September 5, 2015 at Life Care Center in Casper, WY of complications of Alzheimer's disease.
LaDora was born on August 1, 1929 in Amarillo, Texas to Edward and Nayoma Hoff. She graduated high school in Borger, Texas.
LaDora married W.J. (Mac) McPeters on June 24, 1950 in Raton, New Mexico. Mac worked in the oil fields traveling with his family to Wyoming, Texas, New Mexico, then finally settling in Upton, Wyoming in 1965. Mac passed away on April 17, 1981. LaDora moved to Casper in 1991.
She enjoyed bowling, gardening, dancing and collecting turtles. LaDora had to have both her knees replaced in 1992 and came back in 1994 bowling doubles in the Salt Lake City Women's National Bowling Tournament to take 1st place with her partner.
LaDora was a stay at home mom who enjoyed all her kids and grandkids sporting events. She was an active member of the MRS club in Upton she was also a member of Eastern Star. She enjoyed going with Mac to all the Shrine Club events especially initiating people into the Turtles Club.
LaDora was preceded in death by her husband, a grandson Travis Kidd and granddaughter Kristan McPeters. She is survived by daughters Karen Kidd of Evansville, WY, Celia Cedy (Rod) Fraser of Clifton, CO, and sons Bryan (Corina) McPeters of Upton, WY and Daryl (Terry) McPeters of Uniontown, OH. She is also survived by 6 grandchildren Tonia Hermosillo, Carmen (Justin) Wisser, Tyler McPeters, Ryley McPeters, Rourke McPeters, Rayel (Zach) McCoy, 10 great grandkids, her brother Bill Hoff and 2 sons of Salida, CO.
Visitation will be held on September 10, 2015 from 5:00PM-7:00PM at Bustard's Funeral Home West Chapel. Funeral services will be held at the Methodist Church in Upton, WY at 11:00AM and interment will follow at the Greenwood Cemetery in Upton, WY.
Memorial contributions may be made to the Alzheimer's Association; Alzheimer's Association National Office, 225 N. Michigan Ave., Fl. 17, Chicago, IL 60601.
Bustard's Funeral Home is in charge of arrangements.

To order memorial trees or send flowers to the family in memory of Mrs, Peters, please visit our flower store.