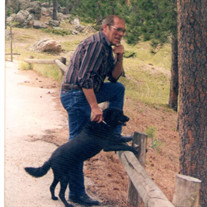 Bob was born Robert Lynn King on July 13th, 1947 in Huron, SD to Donald and Florence (Cable) King. He spent his early years growing up on a farm near Wessington, SD. He graduated from Wessington High School in 1966. He then began his working life and also enlisted in the SD National Guard. He was honorably discharged in 1972. Bob was united in marriage to Becky Edinger on March 16th, 1969 in Aberdeen, SD. To their union two sons were born, Jason and Pat. The couple divorced in 1983. Bob began working at Black Thunder Coal Mine at Wright, Wyoming in December 1979 where he worked for the next 25 years. Bob was united in marriage to Judy Varner Benshoof on August 22, 1996 at The Country Church. They spent their married life near Newcastle. Bob loved to travel and drove truck across country for several years after retiring from the mine. He and Judy had great times traveling from coast to coast and all points between with their beloved dog, Mya.

His deepest, and greatest, pride and joy were in his two sons.

Bob was a giving man that never withheld his time, financial assistance, or compassion from anyone in need. He served his fellow man with quiet humbleness and will be missed by many.

Bob was preceded in death by his parents, sister Debra, brother Gene, and infant brother, Keith and many nieces and nephews.

The family requests in lieu of flowers that donations be made in Bob's name to The Country Church, Four Corners, WY, 82715 or to the Weston County Helping Hands Foundation, Newcastle, WY. 82701

Arrangements are in the care of Worden Funeral Directors, Newcastle. , WY.

To order memorial trees or send flowers to the family in memory of Mr. Robert King, please visit our flower store.