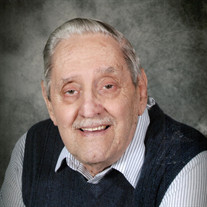 He was born in Joliet, IL on July 31, 1935 to Helen (Carlson) Cunningham and Harry Cunningham.

They later moved to Minong, WI where Bob graduated from high school. He entered the U. S. Army shortly after graduation and served his country for 3 years.
Bob was an active sportsman who enjoyed fishing and hunting. He worked for the forest services for 20 years. He also worked for several years in Wisconsin and Texas at the State Highway Department.

Bob's parents, Brother Harry, Jr. and his sister in law Florence and Sister Edith preceded him in death.

There will be a celebration of Bob's life at the First United Methodist Church in Newcastle at 9:00 AM on Thursday, October 16th. Honored pallbearers are Eddie Cargill and Harry Wilcomb of Newcastle.

To order memorial trees or send flowers to the family in memory of Mr. Robert Cunningham, please visit our flower store.