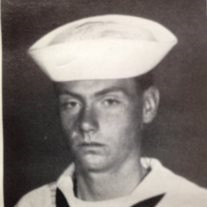 The family returned home to Newcastle, where Rick grew up. As a family, the favorite pastime was camping, and they did a lot of that during his childhood. Rick liked basketball- loved shooting hoops for hours in the yard, and motorcycles. He did not, however like school. Rick quit school at the end of his freshmen year, and went to work above Sheridan, WY at Eaton's Dude Ranch in the Big Horn Mountains. Rick worked there until he was old enough to join the United States Navy at the age of 18.

Rick served in the Navy for almost 18 years. He was sent to school to be a Navy cook- then later to Chef's school. He served on the U.S.S. McCoy and saw ports all over the world. He was in the Vietnam War, and at the end of his service he was a chef for the military brass at NATO. When Rick left the Navy in 1991, he came home to Newcastle.

In 1992, he met Sherrie Hogan - the woman he always claimed he waited 39 years to meet- and they married on August 26, 1994. Rick worked at the hospital in food service for a brief time, and then got a position at the Wyoming Honor Camp, running the food program for the inmates. He later transferred to the prison in Rawlings, Wyoming, where he worked until he had to retire in Jan. 2013, due to a diagnosis of stage 4 lung cancer.

Rick and Sherrie moved back to Newcastle in February of 2013 to be close to his sister and his nephews.

Rick was a homebody, and loved spending time at home with Sherrie. They liked to go to the flea markets and finding unusual treasures together. Through the years, Sherrie battled many different health issues, with Rick by her side- taking care of her every step of the way. Rick's four stepdaughters are eternally grateful for all of the loving care of their mom.

Rick particularly loved their little dogs, and played with them constantly. The dogs were his babies.

There will be a viewing on Thursday evening from 5 to 7 at Wordens Funeral home.

Burial will in that afternoon at The Black Hills National Cemetery at Sturgis, SD.

In lieu of flowers or a memorial , Sherries daughters request that monetary donation be made to help with medical expenses incurred.

To order memorial trees or send flowers to the family in memory of Mr. Rick Johnson, please visit our flower store.