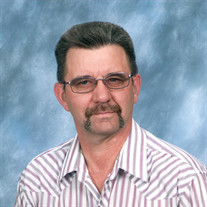 The Hansen Family moved to Casper in 1963 so Rick could attend the Wyoming School for the Deaf. Rick attended school in Casper until moving back to Newcastle in 1977. He graduated from Newcastle High School in 1978. Growing up, Rick was involved in FFA and High School Rodeo Club. He also enjoyed being outdoors and especially his hunting adventures with his sons. After high school, Rick attended Casper College, receiving his certification in heavy equipment. He worked in the oil trucking industry until his diagnosis of epilepsy in 2004. Until his death, he held various jobs in the Casper area. Rick was deeply devoted to his Catholic faith. He was a member of St. Patrick's parish in Casper, where he was on the advisory board of the parish council and an usher. Rick dedicated a great deal of time to the Beginning Experience group in Casper. He was involved in the growth and expansion of the organization. He was passionate about assisting the group members on their spiritual jouneys. Rick's first priority in life was God.

In lieu of flowers, the family asks for donations to The Beginning Experience of Wyoming, Inc., PO Box 50794, Casper, WY 82603-0794 or the Epilepsy Foundation.

To order memorial trees or send flowers to the family in memory of Mr Rick Hansen, please visit our flower store.