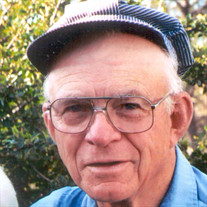 The family settled on the Chet Cain place. Dick started school at Fairview, when the bus was discontinued he was given isolation money and finished grade school at the Knobby Knoll school. He graduated Newcastle High School in 1949. On January 17, 1951 he married his life's sweetheart Helen Morris. He placed "You Are My Sunshine" for Helen when they were 13 years old. He played the push button accordion, as did his father and his grandfather. It was the first song he played every time he got out with his accordion. Dick went to work for Black Hills Power February 5, 1952. He worked there 41 ½ years staring as a coal handler at $1.10 an hour. And retired as plant operator. Dick was an ordained Deacon and served many years - moved to a church elder. He worked his spare time for whoever needed help. He was paid in hay and grain for his horses and cattle and chickens. Dick was a member of the Gideon's International, placing many Bibles in Newcastle and Sundance. Dick and Helen had five children. Shirley Ann, Bonnie Joyce, James Richard, Linda Lou and Patty Jo.

Dick had back surgery in June of 1951. He fought pain until December 1, 2009 when his legs gave out. In April, 2010 he entered long term care in Sundance and was wheel chair bound.

Dick loved wood work and they built and opened "Helen's Hobby House" in 1984. It was stocked with crafts they made. They took in many craft shows.

Dick loved the church and spent many hours in service. He is survived by his wife and five children, 15 grandchildren and 24 great grandchildren. Preceded in death by his parents, one grandson and many relatives.

A memorial to Gideon's International has been established, contributions may be mailed to 921 Mountain Meadow Lane, Apt. 8-207, Gillette, WY 82716.

To order memorial trees or send flowers to the family in memory of Mr. Richard Knipp, please visit our flower store.