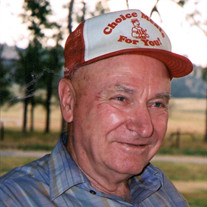 Raymond Charles Austin died March 7, 2015 at age 84 at the Weston County Health Services Home where he has been living for the past year. Ray was born in Newcastle, WY to Roscoe and Mable Austin December 21, 1930. He graduated from Newcastle High School in 1949 and then attended the University of Wyoming in Laramie. After college he joined the Navy. Upon his discharge he returned to the family ranch south of Newcastle on Robber's Roost Creek. The ranch was sold in 1965 and Ray moved, with his parents to Edgemont, SD where Ray did various things to make a living. After Roscoe's death Ray and Mable moved to Newcastle, where Ray has lived the remainder of his life. Ray was preceded in death by his parents; Roscoe Charles Austin and Mable Pearl (Olson) Austin, by his siblings; Myra A. Smallwood, Phyllis M. Hanson, Frances J. Gaskill, and Frederick A. Austin. He leaves many nieces and nephews.
Graveside services will be held in Greenwood Cemetery Saturday, March 14, 2015 at 3:00 pm with visiting after the service at the John and Royce Keller home southeast of Newcastle.

To order memorial trees or send flowers to the family in memory of Mr. Raymond Austin, please visit our flower store.