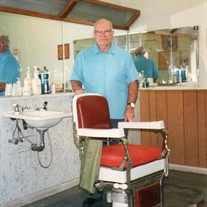 Ray Streets, 100, was born January 9, 1914 in Crofton, Nebraska the son of Nancy Anderson Stalder and George Tolbert Streets. He died July 9, 2014 at the Weston County Manor in Newcastle. On June 1, 1937 he married Mary Mann, who preceded him in death.

He is survived by his wife June Streets of Newcastle; son Dallas and Harriet Streets of Gillette, WY, daughters Lynda and Carl Toland of Palm Desert and Marcia Romano of Sundance, WY; one brother Roy Streets of Bandon, OR an numerous nieces and nephews. Also surviving are 10 grandchildren and 2 great grandchildren, and other children and grandchildren through his marriages to Jean Johnson Streets and June Gould Streets.

Viewing and Celebration of Life will be at the First United Methodist Church of Newcastle on Saturday, July 12th from 2:00 PM to 3:00 PM. Funeral services will begin at 3:00 PM with Rev. Jeff Thom officiating. Burial following services will be at Greenwood Cemetery under direction of Worden Funeral Directors of Newcastle. A luncheon will be provided at Newcastle Senior Services immediately following the interment. Memorial donations are requested to Weston County Manor, 1124 Washington Blvd., Newcastle, WY.