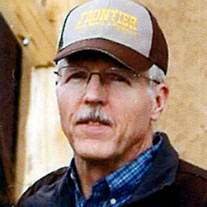 Randolph "Randy" Wayne Dirkes, 65, of Newcastle, died Sunday, April 13, 2014, at Weston County Health Services Center, from recently discovered cancer. He was born March 2, 1949, in Columbus, Ohio, to Richard and Betty Lou Allen. He grew up in Southern California and graduated from California State University, Fresno with a degree in Chemistry. He went on to obtain a Masters Degree in Theology from Dallas Seminary. He married Sandra "Sandy" Keesey June 21, 1975. After seminary, they went on to a pastorate in Hanston, Kansas, followed by a year of teaching at Maranatha Bible College in Ghana, West Africa. He continued in pastoral ministry in Big Spring, Texas, and taught at a Christian high school in Turlock, California. After 12 years of full-time ministry, Randy and family moved to Bakersfield, CA where he managed Gardener's Supply for almost 20 years and served faithfully in the churches they attended. Randy served in the military reserves for 16 years. He started in the Army as an X-ray tech then transferred to the Navy as a reserve chaplain. He ended his service in 1994. In the summer of 2012, Randy and Sandy moved to Newcastle, Wyoming and opened Frontier Home, Ranch and Hardware. They loved the great outdoors and for years Randy had dreamed of putting down roots in Wyoming. He sought to honor God in all of life's decisions and actions. Every morning he and his wife awoke desiring to "honor God, love family, and serve Newcastle". Since moving here they have felt warmly embraced and blessed by the love and support this community has offered. He deeply loved their family of six children and six grandchildren. When he pursued his interests in camping, reading, gardening, fix-it projects, and playing games, he always included his children, as he loved spending time and creating memories with them. Randy will be remembered as a man of excellence, integrity and influence. His passion for teaching was highly valued by all who heard him preach or attended his in-depth and challenging Sunday School classes where "light bulbs were turned on". Randy is survived by his wife, Sandra "Sandy" Dirkes of Newcastle; six children, Wayne Dirkes (Lindsay) of Hurlburt Field, FL, Scott Dirkes (Emily) of Hermosa, SD, Michelle Wynn (David) of Palm Desert, CA, Eric Dirkes of Laramie, Anna Dirkes of Bakersfield, CA, and Rebecca Dirkes of Bozeman, MT; six grandchildren; his natural mother Betty Lou Dirkes, step-father Ron Dirkes and brothers, Ted, Ron and Don Dirkes; step-mother Alice Allen and siblings, Kathleen Donavan, Darren Allen, Connie Burk, Bonnie Bizzaro, and Karen Allen. He was preceded in death by his father, Richard Allen. Visitation will be from 5 to 7 p.m. Thursday, April 17, at Worden Funeral Home. Following private interment, a community memorial service will be held on Friday, April 18 at 3 p.m. at the Weston County Senior Citizens Center. Pallbearers will be Wayne Dirkes, Scott Dirkes, Eric Dirkes, Rob Harris, David Wynn, Clay Andersen and Phil Thurman. Randy's final overseas ministry was a time of teaching at a seminary in Tanzania, Africa, in 2010. The family asks that memorial donations be made to: International Christian Ministries (note: ICM Seminary Tanzania), 4201 Ardmore Ave. Suite 8, Bakersfield, CA 93309.

To order memorial trees or send flowers to the family in memory of Mr. Randolph Dirkes, please visit our flower store.