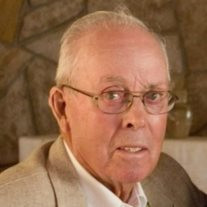 Neal Riesland was born June 30, 1926 the son of Earl and Kate (Borchgrevink) Riesland in Deadwood, SD. At the time, the family was living in the Rocky Point, Wyoming area, where Earl was a foreman for the Parks Ranch and Kate was a school teacher. Earl switched jobs to the railroad, moving to Echeta, Felix and then Rozet, Wyoming. Much of Neal's younger life was spent riding horseback, either going to and from school or riding on the ranch. Neal graduated from Rozet High School in Rozet, Wyoming in May of 1944 He had a great passion for basketball. His team in high school was undefeated for several years.
As a result of the bombing of Pearl Harbor he enlisted in the U.S. Navy before graduation. So right out of high school he fought and served on the USS Broadwater in the South Pacific during World War II where he was a Seaman First Class.
After the war he returned home and married Hazel L. Kottraba on June 25, 1948. They lived outside of Rozet, Wyoming, where Neal worked at Wyodak Coal Mine until 1950 when they moved to Alzada, Montana where he worked for his uncle on his ranch. They moved to Newcastle, Wyoming in 1954 where Neal operated the Echo Grocery Store, Neal's Texaco and then Neal's Triangle Texaco Station. Making a total of sixteen years in the Texaco business.
In 1970, Neal and Hazel decided to go after his life long dream of owning a ranch, buying a ranch in the Clareton, WY area. For them raising livestock, working hard, enjoying family and the outdoors was as good as it gets. Neal team roped for several years where he won a number of championship belt buckles in the area. He also is known for riding a bucking horse double. Neal was active in the community throughout his entire life, feeling that people should give back to their communities. He served on FSA boards, was a member of the Newcastle Volunteer Fire Department, Wyoming Stock Growers, Newcastle Masonic Lodge #13, Order of the Eastern Star Newcastle Chapter #30, Kalif Shrine, Inyan Kara Shrine, Veterans of Foreign Wars and American Legion.
Neal passed away March 21, 2014 at the Weston County Health Services Manor. He was preceded in death by his wife Hazel, his parents, sister and granddaughter Katie Cummings.
He is survived by two sons Rick (Connie) Riesland of Cheyenne, Wyoming, John (Robin) Riesland of Newcastle, Wyoming and a daughter Linda (Jerry) Phillips of Newcastle, Wyoming. Grandchildren Kelly (Todd) Fuoss, Jamie (John) Foster, Ricky (Angela) Phillips, Lori Riesland, Holly Riesland and Colton Cummings; great grandchildren Owen Cummings, Cayson Phillips, Casey Foster, Henry Fuoss, Riesland Cummings, Bentley Phillips and Kaiden Foster. His brother David Riesland and numerous cousins, nieces and nephews.
Neal died Friday, March 21st at Weston County Health Services Manor.
Visitation will be held at Worden Chapel Wednesday, March 26th from 5:00 PM to 7:00 PM. Funeral services will be Thursday, March 27th at 1:30 PM at Christ the King Lutheran Church with Rev. John Hopper officiating. Burial will follow at Greenwood Cemetery with military rites by Newcastle VFW, Post #2516, followed by Masonic rites by Newcastle Masonic Lodge #13. The family has established a memorial in Neal's name to Shriners' Crippled Children's' Hospital or Weston County Health Services Foundation. Worden Funeral Directors of Newcastle are in charge of arrangements.

To order memorial trees or send flowers to the family in memory of Mr. Neal Riesland, please visit our flower store.