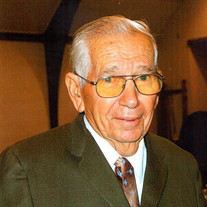 Myron was born on November 12, 1925, at Teapot Dome north of Casper, Wyoming to George and Lois (Brown) Kiesling. The family moved to Osage, Wyoming, late in 1927, where George and Lois started an oil drilling and production business. Myron went to a country grade school near their home, then to Newcastle High School for three years, and finished high school at Loveland, Colorado, after the family moved there. After graduation, Myron joined to U. S. Navy during World War II, attended radio school at various locations, and was assigned to the PBY base at Oak Harbor, Widbey Island, patrolling the Pacific Coast for enemy submarines. He was honorably discharged in June, 1946,

Myron returned to the Osage Oil field to assist his dad in operation of oil field business activities. He continued working the oil fields until he sold the family business in December, 2007. Shortly thereafter, his diabetes and dementia required his moving into the Manor at the Weston County Health Services facility in Newcastle in 2009, where he had remained until his death.

Myron was active for many years in the Methodist Church including serving for some time as deacon, a member of Lions Club, the American Legion, and an active member of the business community by helping in fund raising campaigns. He assisted on the Weston County Health Services Foundation Capital Campaign Committee.

Myron is preceded in death by his parents, George and Lois Kiesling. He is survived by his siblings, Bettie Nelson of Greeley Colorado, Dorothy Kinnie of Louisville, Colorado, Marvin Kiesling of Loveland, Colorado and Edward Kiesling of Newcastle, Wyoming.

To order memorial trees or send flowers to the family in memory of Mr. Myron Kiesling, please visit our flower store.