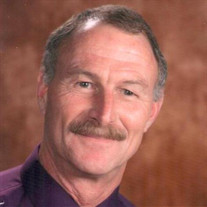 Myron Philip Hoffman, 58, passed away at his home on March 27, 2015 in Newcastle, Wyoming.
Myron was born in route to the hospital between Fort Yates and Bismarck, ND to Stephen and Catherine Hoffman, on July 24, 1956. He attended first grade at St. Bernard's in Ft. Yates, ND, and then St. Stephen's outside of Riverton, WY through 4th grade, finishing 5th through 12th grade at Roncalli Catholic Schools in Aberdeen, SD. After graduating in 1974, he attended Northern State College in Aberdeen, SD where he earned his bachelor's degree in Elementary Education in 1981.
Myron married Cathy Patterson on May 21, 1977. Together they had three children: Ryan, Alyssa, and Bryce. After 18 years of marriage, Myron said goodbye to one love. On February 20, 1998, he married Karmel Brothwell and his family expanded to two stepchildren, Shawna and Jimmy.
Myron taught elementary school for 32 years at Gertrude Burns before retiring in 2013. Upon his retirement, he was awarded the Clara M. and Henry T. Jensen Outstanding Wyoming Teacher Award that he so humbly received.
Myron was a man filled with many passions. His family and friends were at the top of his list! No one was a stranger to Myron and everyone was always welcome in his home. He loved being a teacher and a coach. The impact he made on the hundreds of students he taught and the athletes he coached was profound! It wasn't just about math and science or the fundamentals of wrestling and football, it was also about being a team, about the importance of relationships and about life lessons.
Aside from his home, Canada was his ultimate Paradise! He loved the peacefulness and tranquility of the lakes, the awesome fishing, the sounds of the loons, singing around the bonfire, and telling his wonderful stories. Every morning Myron would get up and drink his coffee while writing in his journal about the previous day's events. There are numerous notebooks filled with his writings. His penmanship was pristine and his words painted a portrait.
Myron had a zest for life. He treasured every moment and to him, every day was a good day. His hobbies were endless. If Myron wasn't cutting down trees, chopping up wood, remodeling his home, he was building furniture and trash cans or reconstructing the retaining wall. He was a true craftsman!
He was such a strong man, not just physically but mentally. He was a rock. Myron was truly loved by all who knew him and you never said goodbye to him without getting a pat, pat, pat, rub, rub and a huge bear hug. His time on this earth was way too short, but the memories of his life will remain with all who loved him forever. Go Seahawks!!
He is survived by his wife Karmel Hoffman; Newcastle WY, son Ryan (Lacey) Sydney, Paisley, Myley Hoffman; Franklin NE, daughter Alyssa (Jared) McKenna, Camary, Hunter Sallee; Cheyenne WY, son Bryce (Amy) Davyn, Brooklyn Hoffman; Newcastle WY, step daughter Shawna (Nelson) Carson, Kobee Holwell, Newcastle WY, stepson Jimmy (Angie) Kylee, Kaden, Kaleb Brothwell; Yoder WY, mother Catherine Hoffman: Aberdeen SD, brother Mark (Donna) Hoffman; Casper WY, brother Roger Hoffman; Evergreen CO, brother Richard Hoffman; Brooklyn Center MN, brother Allen (Kelly) Hoffman; Spearfish SD, sister Annette (Mike) Braun; Hastings NE, sister Jeanne (Kevin) Hauck; Aberdeen SD, sister Joyce (Tom) Hinz; Aberdeen SD, and many nieces, nephews, cousins, and friends.
He was preceded in death by his wife Cathy Hoffman and father Stephen Hoffman.
The funeral will be held at the Crouch Auditorium in Newcastle WY, Friday, April 3 at 2 pm. Reception to follow. In lieu of flowers, contributions can be mailed to 23667 Highway 85 North, Newcastle WY 82701 or First State Bank of Newcastle WY to the Myron Hoffman Education Memorial Scholarship.

To order memorial trees or send flowers to the family in memory of Mr. Myron Hoffman, please visit our flower store.