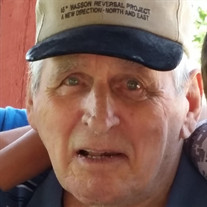 Lyle E. King, 78, of Newcastle WY, passed away peacefully on Sunday March 5th at Crook County Medical Services District in Sundance WY.
Lyle was born February 17th, 1939, in Newcastle WY to Ivan and Norma King. He had 3 brothers and one sister, Larry King, Loren King, Robin King and Lenora King Chapman. He married the love of his life, Shirley King on November 6th, 1960. Together they had two children, Burl King of Broken Arrow OK, and Audra King-Dudzinski of Newcastle WY.
Lyle attended school in Newcastle and graduated from Newcastle High School in 1957. He also was in the Wyoming Army National Guard where he served for 3 years. He worked for Shell Pipeline as a terminal operator for more than 20 years and retired in September 1998.
After retirement he enjoyed several different activities. He like to travel and see new things. He and Shirley were often on the road on some new adventure. When he wasn't traveling he could be found in his woodshop. He loved tinkering around his shop and making new things from wood. He has made everything from sheep, birds, roadrunners, clocks to whatever else Shirley found for him.
He also loved hunting and fishing, and nothing made him happier than to float around on a lake in a boat with a fishing pole. When Burl was in high school he and Lyle spent their falls hunting for deer. One year Lyle thought it was a good idea to shoot a turkey for Thanksgiving, it was the worst turkey ever!!! In the evenings Lyle could often be found surrounded by his friends sitting at the bar in his house playing a competitive game of Cribbage.
Lyle loved his family, and found the most joy when he was around them. His grandsons, Collin and Wyatt, were his biggest joys and they always found a way to keep him entertained. He loved having them stay with him for the weekend and you never knew what adventure they were going to be on.
Lyle is preceded in death by his wife Shirley King, his parents Ivan and Norma King and his sister Lorena Chapman.
He is survived by his son Burl King and wife Mendocino, Broken Arrow, OK; his daughter Audra Dudzinski and husband Eric, Newcastle WY; his grandsons Brandon, Josh, Collin and Wyatt, and granddaughter Brittany; great grandchildren Silas, Cameron and Levi. As well as his brothers Larry, Loren, Robin and their families.
Services will be held at Worden's Funeral Home Chapel in Newcastle, WY Friday March 10th, at 1:00 pm with Pastor Mick Bohn of the Foursquare Church officiating. Burial will follow at Greenwood Cemetery. Following the burial, a celebration of life will be held in his honor at the home of Audra and Eric Dudzinski.

To order memorial trees or send flowers to the family in memory of Mr. Lyle King, please visit our flower store.