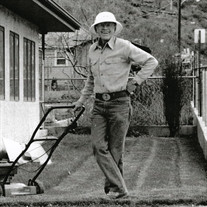 Loyd John Reimer was born in his family home in Chinook, Montana, on April 4, 1917. He died peacefully in Newcastle, WY, on April 4, 2017, on his 100th birthday. He was born at home, the third of nine children of his German immigrant father Jakob Reimer and mother Elizabeth Wiebe Reimer. When Loyd was eight years old the family was forced to leave Montana due to drought and grasshoppers and moved to Oshoto, WY. After another move he entered school with his two older sisters and graduated with them in the class of 1936 from the Hulett, WY, high school. After graduation Loyd taught for seven years in rural schools in Crook and Weston counties.
In April 1942 he enlisted in the US Navy to help with the US efforts in WWII. He served on the destroyer the USS Nicholas and encountered the enemy in numerous battles from Hawaii to the Philippines to Australia. The Nicholas was later commended at the end of WWII when it and other naval vessels were asked to escort the US signatories to sign the peace treaty in Yokohama, Japan. Loyd served two and a half years on the Nicholas. He was a proud veteran and encouraged others to remember the efforts of all veterans.
After the war he and Virginia Bruce were married in Newcastle, WY, on June 4, 1946. They had three sons Lanny, John, and Paul. He joined the National Guard and retired after 30 years of service.
Loyd worked many years as a surveyor for the Wyoming Highway Department and enjoyed a long active retirement starting in 1983. He always enjoyed gardening and daily exercise, including running. He felt exercise and hard work to be the bases of good health. He cherished family gatherings, enjoyed gardening, working outside, and hobbies of woodwork and jewelry making. He revered his mother and the mothers of his descendants for their efforts. He valued hard work and a job well done as tributes to both his father and mother.
He was preceded in death by his son John in 1985, his wife Virginia in 1990, sisters Anna, Stella, Zelma, and Ida, and brothers Henry and Alven. Ella Rawhouser, a close friend for eighteen years also preceded him in death.
He is survived by his children Lanny (Connie), Paul (Barb Hill), John's wife Rhonda DeBello, and grandchildren Crystal Emry (Geoff), Christopher (Dessa), Carol Hopkin (Paul), Michael (Mellissa), Jacob (Jen), Mandy Rogers (Joshua), Kristen, and Caitilin, lifelong friend Marge McCoy and her two daughters Lisa and Chris as adopted granddaughters, and by his brother Carl (Martha) and sister Nina Bannister both in Gillette, WY, nine great grandchildren, along with numerous nieces and nephews.


To order memorial trees or send flowers to the family in memory of Mr Loyd Reimer, please visit our flower store.