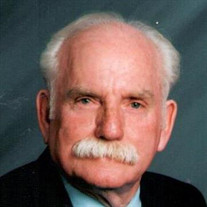 OBITUARY FOR HARVEY D. GOODE
Harvey D. Goode, 88, of Newcastle, WY died Monday December 4th, 2017 at Rapid City Regional Hospital.
He was born February 8th, 1929 in Olney, TX to Harvey C. and Effie (Powers) Goode Carter. He grew up in Texas City, TX on the Gulf of Mexico helping his father shrimp. After his father's death the family moved to Hitchcock, TX where he graduated from high school. Harvey was co-captain of the football team. He worked as a shrimper and mechanic during that time. He served in the Army during the Korean Conflict, stationed in Germany.
Harvey D. "left nothing in Texas" and headed to the oil fields of Wyoming. He met Mimi Ward, the cutest soda jerk at the Newcastle Drug and the rest is history. They married in June of 1950. The couple raised 6 children and had been married for 66 years at the time of Mimi's death.
Mr. Goode continued working in the patch for many years and drilled in many places. Harvey and Mimi were fond of telling stories of packing up the babies, tying the crib to the top of the car, and going to the next hole. They settled in Newcastle with Harvey working at Ward's Lumber Company, Updike Brothers, and other companies. He owned and operated The Goode Standard Station on Main St. for several years. He retired from Western Productions.
Harvey and Mimi were active in Jay Cees with Harvey serving as state president. They were members of bridge club and the Weston County Democrats. Harvey liked to fish and took his children on many trips to various creeks in the Black Hills. He enjoyed bowling in leagues, but his passion was cards. He loved most card games especially Texas Hold Em. He was a regular participant in Tuesday Prayer Meetings and played at the Old Style #10 until the very end.
Survivors include two daughters, Laura Goode of Lake Powell, UT and Wendy Goode (John Rindler) of Laramie, WY; three sons, Harvey H. (Francie) of Newcastle, Matthew (Andrea Tuijl) of Tucson, AZ, and Gregory (Dixie) of Crescent City, CA; five grandchildren, Connor and Colton Rindler of Laramie, Austin and Emerson Goode of Crescent City, and Remi Goode-Tuijl of Tucson. Also four great grand children. Harvey is preceded in death by his loving wife Mimi; his parents, and two sisters JoAnn Lee and Mary Grisham. Also preceding Harvey in death is his daughter April Goode (Vince Gillette) and a grandson Cody Raben.
There will be an interment of the cremains at Greenwood Cemetery at 1:00 P.M. on December 21st, 2017. The family request friends to gather for cake and coffee immediately afterwards at the Weston County Senior Center in the Michaels room.

To order memorial trees or send flowers to the family in memory of Mr. Harvey Goode, please visit our flower store.