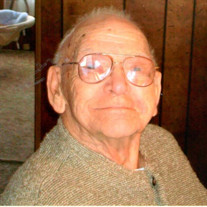 Harry Crawford, 92, of Newcastle, Wyoming, formally of Wheeling, WV, passed away on November 3, 2015 at the Weston County Manor.

He was born September 4, 1923 in Benwood, WV to Harry and Marie Speece Crawford, their only child. Harry became a resident of Newcastle, Wyoming in 1996. He enjoyed his life and family very much. His prized possession was his family which includes three children, one son and two daughters; Dick Crawford (Beth Cummings), Newcastle, WY, Paula Magruder (Rick) of Wheeling, WV and Pam Brackett (Al) of Newcastle, WY. Seven Grandchildren: Shane Crawford (Brenna), Lance Crawford (Nora), Travis Crawford (Marcie) all of Newcastle, WY, Pami Magruder Fazzini who also served in the United States Army (Phil) and Shannon Magruder Bowman (Mark), both from Wheeling, WV, and Jared Evick (Kyra) Newcastle, WY and Jaime Evick Soto (Rudi, currently serving in the United States Army) stationed in Italy. He also has 19 great grandchildren and 8 step great grandchildren, all of which he was most proud.

Harry was a member of the Civil Conservation Corp, Moundsville, WV for 3 years. He enlisted in the United States Army in 1942. He was assigned to India Company, 1st Battalion, 504th Parachute Infantry Regiment, 82nd Airborne Division, who are called "The Devils in Baggy Pants". His military occupation was Rifleman 745, Mkm Rifle M1. Awards earned include; Bronze Star, Purple Heart, Combat Infantry Badge, Distinguished Unit Badge, American Theater Ribbon, European African Middle Eastern Theater Ribbon, World War II Victory Ribbon and the Belgian Fourragere. Campaigns inlcude; Allied Invasion of Sicily (Operation Husky) which was the first airborne military offensive operation in the history of the United States, Allied invasion of Italy (Operation Avalanche), Operation Market Garden which was the "Largest Airborne Operation" and took place in the Netherlands, and the Battle of the Buldge. He also was part of the intial push into the invasion of Germany. Harry's Combat jumps include; Sicily, Salerno, and Holland.

He was honorably discharged from the United States Army on January 17, 1946. After returning home from the war he married Pauline Frances Bauer on January 26, 1946. The couple lived in Wheeling, WV and he became a truck driver for the freight industry for 32 years. He was preceded in death by his wife of 50 years.

A memorial service was held at Worden's Funeral Home and a gathering of family and friends took place on November 5, 2015 at the Weston County Senior Center , where Harry spent a lot of his afternoons. He was laid to rest with full Military Honors at the Black Hills National Cemetery in Sturgis SD.

Harry has always flown and respected the flag of the United States of America, in his honor, memorial contributions be made to the Local Post Veterans Of Foreign War of Newcastle, Wy.

To order memorial trees or send flowers to the family in memory of Mr. Harry Crawford, please visit our flower store.