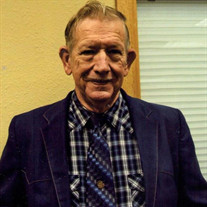 George L. Shirley, 79 passed away Saturday, June 10, 2017 at Weston County Health Services.
He was born February 15, 1938 in Pueblo, Colo. to George and Ida Shirley. He served in the Army. He moved to Newcastle in 1959 and married Edna Fairbanks they had 7 children, they later divorced. In 1988 he married Verna Hultenschmidt in Custer, So. Dak.
George worked for the Wyoming Department of Transportation for 30 years and retired in 2001, he and Verna spent winters in California. He liked fishing and hunting. He was very proud being an active Jehovah's Witness.
He is survived by his wife, Verna, three daughters Cindy (Victor) Ireland, Vickie (Jim) Dains, Patsy (Tim) Rose, two sons LeRoy (Jan) Shirley, Don and first Edna Orsborn and six grandchildren, Joey, Michael, Broderick, Bianca, Deenna, Britni and one great-granddaughter Gweneth, two sisters, Darlene of Wisconsin and Beverly from Casper. Plus several cousins, nieces and nephews.
Preceding George in death are his parents, a son Bobby, a daughter Bonnie and his sister Betty.
Services will be Saturday, June 24 at 2 p.m. at Kingdom Hall in Newcastle, a reception will follow the service.


To order memorial trees or send flowers to the family in memory of Mr. George Shirley, please visit our flower store.