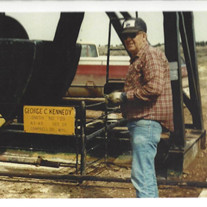 George C. Kennedy, age 83, of Upton passed from this life on May 3, 2014 at Weston County Health Services in Newcastle.
George was born November 6, 1930 in Sully County, South Dakota to Willard and Elizabeth Ann (Brubaker) Kennedy. He grew up in the Onida, South Dakota area, the youngest of nine children, and attended school until the 8th grade.
George worked with two brothers in the Weston and Campbell County oilfields before entering the Navy, serving for two years of active duty and ten years in the Navy Reserves. After serving his country he joined his parents, who had moved to Highmore, South Dakota to work on a farm. In Highmore he met Mavis Hinkle and they were united in marriage on December 10, 1951. They started their married life with George farming in the Holabird, South Dakota area.
George began working in the oilfields, moving his family from Montana to New Mexico and every state in between, finally settling in Weston County. They lived first in Newcastle and then in Upton since 1960.
George drove truck, worked as a mechanic, and hauled bentonite with his truck before he opened his own welding business in 1961. His welding led him into the oilfield once more, later purchasing and producing his own oil wells. George also drove the Upton High School activities bus.
George and Mavis, semi-retired, traveled to the South and Southwest during the winter months. They later settled on Green Valley, Arizona as their snowbird winter home, returning to Upton and family in the summer months to touch base with old friends and spend time in his shop.
George is survived by his wife of 62 years, Mavis; daughters Connie (Cory) Hopkins of Gillette and Janice (Richard) Peterson of Upton; sons Kelvin (Donna) Kennedy of Upton and Terry (Susan) Kennedy of Quamedo, New Mexico; nine grandchildren; 18 great-grandchildren; and extended family and many friends in Wyoming and Arizona.
Services will be held on Wednesday, May 7 at 11:00 a.m. at the Upton Community Center. A reception will follow services. A private family burial will be held at a later date. Arrangements are with Worden Funeral Directors in Newcastle.

To order memorial trees or send flowers to the family in memory of Mr. George Kennedy, please visit our flower store.