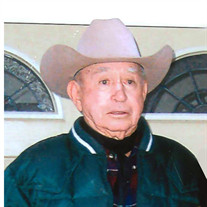 Francis Earl Carr died Tuesday, Feb. 3, 2015 at Newcastle Health Services Hospital.
He was born Jan, 14, 1927 in a log cabin SE of Newcastle on the family homestead ranch to Earl and Ruth Carr. As a young boy he lived his live on the ranch and for some summers, he and his family lived and worked in Yellowstone. He went to school until 8th grade at Clifton a little country school south of Newcastle. His family then moved to Newcastle for a time where he attended high school and graduated. He then went to Black Hills State College in Spearfish for 2 years.

Francis fell in love with Betty Jane Stok and they were married June 27,1949. The following year they moved to one of the family ranches. In 1956, they built a home near Dewey, S.D. on the site where he was born. He and Betty worked side by side along with their 5 children raising cattle and sheep. Francis continued to rodeo and all 5 of his children were involved in rodeo and his sons playing basketball and football. He took great pride in seeing his kids compete.

In 1980, Francis decided to give up the ranching and he along with his wife Betty started training race horses. They traveled as far away as Oklahoma, New Mexico, and Utah to train. They raced horses in Wyoming, South Dakota, Montana, Colorado, and Oklahoma. He was voted Wyoming Racehorse Trainer of the year for 6 years in a row. They would return to the ranch at the end of the racing season for a few months and then begin training and racing again until 1998. Upon the death of his beloved and partner Betty, Francis gave up training and came home to the ranch. He lived there until January 2007. He then moved to South Dakota for awhile and then he decided he wanted to be back in Newcastle, Wyoming where most of his friends and relatives lived.

Everyone who knew Francis knew him for his "tell it like it is" and his sense of humor. He loved to tell old stories and would laugh so hard that tears would come down his face. He took great pleasure in his grand children and loved to go hunting, fishing and rock hunting with his grandsons. He loved seeing his granddaughters and grandsons play basketball and the grandsons playing football (high school and college) and attended as many games as he could. He also took pleasure in seeing his granddaughters become beautiful young women. His greatest love was dancing and sometimes he would go to the Senior Citizens and dance every dance.

He was preceded in death by his wife Betty; his folks Earl and Ruth; 1 brother Bob; his beloved sister Mary; and twin infant Carr grandchildren.

A memorial has been established in Francis Carr's name and may be sent to Box 446, Newcastle, WY.

To order memorial trees or send flowers to the family in memory of Mr. Francis Carr, please visit our flower store.