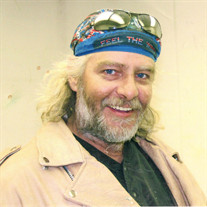 Edward Merle Schlup, 54, was called to heaven after a heart attack at his home in Gillette on March 9, 2015.

He was born in Newcastle to Ralph and Ruth Schlup on October 19, 1960. He graduated from Newcastle High School in 1979. In 1984, he married Naomi Linton and welcomed his first child, Drew, into the world. A few years later, he enlisted in the United States Army. He was stationed in Germany where he developed fondness for BMWs, the Autobahn, and German beer. It was in Germany where his second son, Erich, joined the family. He was honorably discharged in 1990 and returned to Newcastle.

Anyone who met Ed realized quickly that he had a knack for conversation. This quality was essential to many of his jobs whether it was the 'TCI cable guy', the construction worker, or the voice of KASL. He spent many years broadcasting for high school sports and local races. After retiring his mic, he moved to Gillette and started working for Peabody Energy as a haul truck operator at NARM.

In his free time, Ed was an adventurous student of life. He enjoyed riding his Harley, traveling, savoring nature's beauty. He was a gamer whether it be video, sporting, table or monetary. Regardless of his adventures, he always made it a point to spend time with his family. He especially liked spending time with his new grandchildren born in November 2013 and January 2015.

Survivors include his sons Drew, Sterling, CO and Erich, Gillette; siblings Darrell, Newcastle, Pat of San Diego, CA; Marg, North Glenn, CO; Rob, Newcastle; and Ron, Laramie. He is preceded in death by his parents Ralph and Ruth, and brother Rick of Newcastle.

Visitation will be from 5 to 7 PM Tuesday at Worden funeral home in Newcastle.

Services will be 10 AM Wednesday at Worden, with Pastor Mick Bohn officiating. Burial will be in Sturgis at Black Hills National Cemetery at 2:30 PM Wednesday, March 18, 2015.

The family suggests any memorials or donations be made to BACA (Bikers Against Childhood Abuse) or the Wounded Warrior project.

To order memorial trees or send flowers to the family in memory of Mr. Edward Schlup, please visit our flower store.