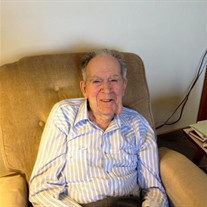 Funeral services for John Earl Christensen, 95, will be held at 2:00 pm Thursday, February 5th at First United Methodist Church with Pastor Jeff Thoms officiating. Visitation will also be held Thursday from 10:00 am to 2:00 pm at First United Methodist Church. The family prefers memorial contributions to the Newcastle Lodge #13 building fund or to Mondell Heights Retirement Community.

Earl, as he was best known, was born December 20, 1919 in Sheridan County at his grandparent's home 10 miles from Sheridan, WY to John C. and Alma (Butterfield) Christensen. He was a graduate of Newcastle High School and went on to graduate from the University of Wyoming, College of Agriculture with a Bachelor of Science Degree. He returned to the family ranch north of Newcastle and continued ranching with his father. He married Mae Darlington on December 20, 1944 in Laramie, WY. Together they continued life on the family ranch raising their four children.

Earl was active with organizing four wagon trains for which he was the head scout. The first and the last wagon trains ended up at the Wyoming State Fair in Douglas. There were many friends and neighbors that joined in on the trips. He also stayed busy as an active member of the community. He was Past Master Newcastle Lodge #13 AF&AM, Past Patron Newcastle Chapter #30 Order of Eastern Star, 33° Mason Scottish Rite of Sheridan WY, Past Potentate Kalif Shrine, Past Grand Guardian of Jobs Daughters, Past Grand Patron Order Of Eastern Star, Past Grand Master AF&AM Of WY and a member of the Newcastle Methodist Church. When Kalif Shrine celebrated its 100th anniversary, Earl was selected Shrine Mason of the Century. He served as State Senator for 24 years and became President of the State Senate in 1969. He also helped form the original Tri County Board of REA, was a board member of Tri County REA from 1945-1959, and served on the Joint Powers Board and the Weston County Fair Board. He also had a love of music and playing his washtub with the Hillbilly Band at the Manor and Mondell Heights.

Preceding him in death were his wife Mae, his parents John and Alma, one sister, Elsie and infant grandchild, Michael.

To order memorial trees or send flowers to the family in memory of Mr. Earl Christensen, please visit our flower store.