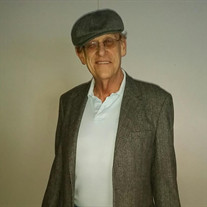 Message:
Dewayne Martin Johnson Dewayne Martin Johnson, 66, of Upton, WY died Saturday, August 27, at home with his wife and children at his side. He was a simple man who died of complications (prostate cancer). He was born December 24, 1949 in Mobridge, SD to Martin and Carol (High) Johnson. The family lived in South Dakota at Mobridge, Deadwood, and finally in Edgemont where he graduated from high school. During the Vietnam war, he was a helicopter mechanic for the army in Germany. He later spent three years in college, first in Aberdeen, SD and then at Black Hills State in Spearfish, SD. On August 4, 1977, he married Sandy Ehman in Anaconda, MT. The couple made their home in Upton, WY. Dewayne worked for BNSF railroad in the track department, holding many different positions, with machine operator being his favorite. In the 1980's he became an accomplished fur trapper both as a hobby and for income during winters that he was laid off from the railroad. Some of his many interests were, history, mountain men rendezvous, hunting, fishing, shooting, radio controlled airplanes, and working on hot rod projects with his son, Caleb. As a long-time member of the Upton Gun Club, he organized and ran some Schuetzen rifle matches. Survivors include his wife Sandy and his son Caleb, both of Upton, WY, his daughter Lea and her husband Lee Kennedy of Lenexa, KS. Services will be Saturday, September 3, 10:30 a.m. at the Upton Elementary School, food and fellowship following the service. Interment will be at Black Hills National Cemetery at a later date.

To order memorial trees or send flowers to the family in memory of Mr. Dewayne Johnson, please visit our flower store.