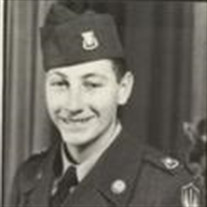 Delwayne "PeeWee" Zundel was born the youngest of eleven, on the family farm south of Jud, ND on April 12th, 1935 to Christ and Emma (Frey) Zundel.
After the passing of his father in 1937, he was raised between his mother and stepfather, and his sister Sara and husband Floyd Fode. Delwayne did various work for his sister and brother-in-law on their farm until he joined the United States Army.
Delwayne was honorably discharged after serving his country, and returned home for a short time.
Delwayne moved to Newcastle, WY and resided there until his death.
Delwayne was known for his witty humor by his family and friends. He enjoyed history and one of his favorite yearly trips in June was to go see the Crazy Horse Monument, taking pictures and walking the trail. Delwayne also enjoyed watching classic cowboy movies and was a big John Wayne fan.
He is survived by his brother Calvin (Marcella) Zundel, San Luis Obispo, CA and sister-in-law Betty Zundel, Aberdeen, SD., and many nieces, nephews, and friends. Preceded in death by his parents and stepfather John Rath, siblings, Albert, John, Sara, Ted, Baldwin, Maggie, Emmanuel "Christ", Carrie, and George.
The family would like to thank all the friends that touched Delwayne's life and were there for him until the time of his passing.

To order memorial trees or send flowers to the family in memory of Mr. Delwayne Zundel, please visit our flower store.