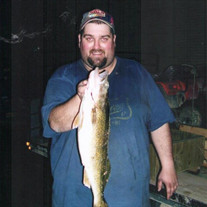 David Ray Kraft, 44, of Globe, AZ, passed away April 20, 2016, at his residence in Globe.
He was born August 19, 1971, in Newcastle, Wyoming. As a young child he grew up in Upton, then on the ranch south of Upton. He attended Upton public school, through high school where he participated in basketball, football, and wrestling. He was in several musicals and as a Senior received the Music Award. David graduated from Upton High School in 1990. After graduation he attended a Baptist College in Pennsylvania, then he attended Chadron State College for 2 years, where he studied Agricultural business.
David moved to Sioux Falls in 1994, where he worked construction. In 1995 he moved back to the ranch and worked for Underwood Oil Company, Benson Brothers, and then the Upton Co-Op. David married Valerie Blakeman May 23, 1998. They divorced in 2001. David started working at Black Thunder in 1998, as an equipment and plant operator.
He married Marge Schlosser on March 14, 2003. They moved to Riverdale, North Dakota, in May of 2007, where he worked for North American coal, Faulkirk location, Underwood ND. He then lived in Gillette, Wyoming, until he moved to Las Cruces, New Mexico, then on to Globe, Arizona where he resided until his death.
David loved fishing, cooking fish, hunting, and just being outdoors. While fishing with David, Yogurt was Not allowed to be seen on his boat! His sense of humor was a joy to everyone he met, and his laughter was contagious! He had the kindest heart! His loved watching the Dallas Cowboys, and he was probably their biggest fan!!!! Angus, David's dog, was a great buddy to him! Angus would even watch football with him, with a little Cowboy's jersey on.
Survivors include his dad, Everett, his step mom Joy, brother Casey, and sister-in-law Danea, their children Landon, and Leah, his sister Tonya and brother-in-law Jason, and their children Savanna, Madison and Monica, and Grandparents, Charles and Viola Hagerman, uncles, aunts, cousins, nieces and nephews.
He was preceded in death by his Grandparents, Whitey and Elizabeth Kraft, and his mom Cathy Kraft.
The Celebration of Life for David will be held Thursday, April 28, 2016, at the Community Center in Upton, at 2:00 pm. Coffee and cookies will be served at the Community Center following the services. Then a reception will follow at Sunset Amigos. We're asking that everyone wear Dallas Cowboy, or blue and white attire, to the service and reception. David would love that!
The family requests that memorials be made to the Upton Young Guns.

To order memorial trees or send flowers to the family in memory of Mr. David Kraft, please visit our flower store.