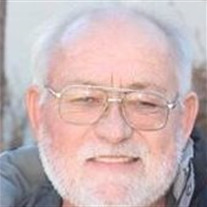 Services for Dale E. Hunter, 56, will be celebrated at 10 a.m. Saturday at Family Life Church (480 S. Hwy 50, Gillette, WY) with Pastor Bill Morel as celebrant. Dale passed away at Close to Home Hospice on May 26, 2014 following a 53 year battle with diabeties.
Dale was born in Newcastle, Wyoming on January 31, 1958, the second son to Ken & Lois (Fillinger) Hunter. He moved with his family to Gillette in 1967, where he graduated high school in 1976. Dale enjoyed telling the story of how he was one of the boys that built the original Humphrey the camel in shop class . While in high school he went to work at Decker's Food Center and made that his career for 18 years. In 1992, he went to work for Campbell County School District for 5 years before becoming disabled.
On May 7,1983 Dale married Ronda Feddersen and they created a wonderful love story. To this union two daughters were born, Makayla Cooper in 1984 and Kelsey Kinney in 1987. Dale was a true family man and was there to support the girls with all of their school activities, getting their careers started and giving good advice to everyday life.
Dale loved the outdoors whether it was fishing in one of the lakes, hunting in the Bighorns or Moskee area, snowmobling in the winter (one of his favorite trips was snowmobiling through Yellowstone), or just watching it rain. He also enjoyed playing cards in Deadwood, SD with Ken Raga and of course cheering on his beloved Chicago Bears on Sunday's.
Dale was a gentle and thoughtful man who went through life without complaining about his disease. He was always thankful for all the good things that happened to him.
Dale is survived by his wife Ronda of Gillette; two daughters Makayla/Derek Cooper and Kelsey/Adam Kinney both from Gillette; father, Ken Hunter of Newcastle; brother Doug/Sheila Hunter of Sundance; 4 grandchildren Lainey & Hayley Cooper and Kaydence & Hunter Kinney of Gillette; Uncle & Aunt Don/Sandy Fillinger and Uncle Donald Gregory both from Newcastle; numerous cousins, nieces & nephews. Preceding Dale in death is his mother Lois Hunter whom he loved very much.
Condolences may be sent to Worden Funeral Home at P.O. Box 627, Newcastle,
WY 82701 or 408 S. Miller Gillette, WY 82716

To order memorial trees or send flowers to the family in memory of Mr. Dale Hunter, please visit our flower store.