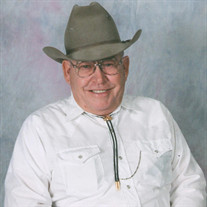 Charles L. Clark, 88, of Newcastle passed away on September 21, 2015 at Weston County Health Services after a short illness. He was born April 23, 1927 near Inya Kara in rural Crook County, the youngest of nine children born to Nathan S. and Hilma Peterson Clark. He attended rural schools in Crook County.
On October 30, 1948 he married Lavonne Conger in Deadwood, S.D. He worked for a time for Homestake in the timber and then for Driskell Cattle Company living summers in Moskee and moving to Red Water near Spearfish, SD in winters. In the late 1950's they moved to Newcastle where Charles worked as an officer for the Newcastle Police Department, then moved to the Sheriff's Department and eventually working 31 years as Brand Inspector until his retirement.
Over the years he was involved with the Youth Livestock Committee, Weston County Rural Fire Department, helped in organizing the Weston County Winter Festivals and was involved with Salt Creek Water district for 48 years in various capacities including board member and operator. He loved being around livestock and always owned at least one horse and bought, sold and traded many horses over the years. He even had a goat broke to drive and pulled kids around in a wagon. Some of his lifetime friends still talk about having fund with Charles' goat and wagon.
He is survived by his wife, Lavonne, daughters Shirley (Larry) Cole and Gerry Clark, grandsons Scott (Terra Kennah) Johnson, Newcastle, Steven Johnson of Wheatland and great-grandsons Christopher and Tanner Johnson, one sister Myra Clingan, Sundance, and many nieces and nephews. Services will be at 2:00 PM Saturday September 26, 2015 in Newcastle at the Methodist Church with burial in Greenwood Cemetery. Visitation will be Friday from 5:00 to 7:00 at Worden Funeral Home.
He was preceded in death by his parents, six brothers and one sister. The family suggests memorial donations in Charles' name to Helping Hands of Weston County.

To order memorial trees or send flowers to the family in memory of Mr. Charles Clark, please visit our flower store.