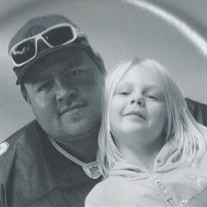 Chad was born October 27, 1979, in Rapid City. He lived with his parents in Rapid City and attended school there as well. In 1995 the family moved to Gillette and he continued school in Campbell county.

He has worked in the oil field for many years, it was his passion. The dirtier the better, he always said "that's what money smells like". August 17, 2005 his daughter Dezeray was born, he was so proud from the first moment he laid eyes on her.

He was always so excited when October 1st came around because that meant hunting season has started. He was always a great shot and was proud of every deer he got. He just loves the outdoors, hunting, fishing, camping, football fanatic go "Cowboys", and loved taking his daughter to the races. He also enjoyed spending his summers with his cousin Jesse and Jason Meverden.

His daughter was the light of his life and she is just as stubborn and he was. He loved his family and friends so much and was a very caring person. His big bear hugs were always the best, they were always so comforting.

Worden Funeral Diretors of Newcastle has been entrusted with the arrangements.

To order memorial trees or send flowers to the family in memory of Mr. Chad Meverden, please visit our flower store.