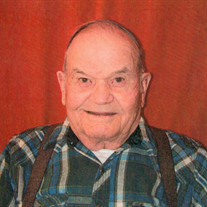 Carl Junior Slagle, 87 years old, of Newcastle, Wyoming died Thursday, June 26, 2014 at the Weston County Manor.
He was born January 9, 1927, to Carl Clifton and Mary Webb Slagle at his family's ranch west of Newcastle. He attended Knobby Knoll Country School near the ranch for 8 years. He attended high school in Newcastle and graduated in 1945. While in high school, he worked at several businesses around town (Toomeys Mill and the bowling alley) and in the summertime he worked for the Tommy Sterling ranch along with his oldest brother Everett.
On June 26, 1947, he married his high school sweetheart, Nadine Herbison. This started their years of a fulfilled life that lasted for 67 years to the day. To this union three daughters were born, Susan, Donna and Gail. While working the family ranch, he also worked in the oil fields around the area. Later he worked in Upton for the Red Onion Museum and at the Old Town.
Carl was Chairman for the Weston County Farm Bureau for a time, board member for Weston County Co-op, member of the Weston County Rural Fire Board, Worthy Patron for Eastern Star several times, and he belonged to the Masonic and Shriner's organizations.
Carl was preceded in death by his parents Carl and Mary Slagle, brothers Everett and Fred, sister Thelma Martens and grandson Dustin Alexander. He is survived by his wife Nadine, daughters Susan (Herman) Hafner , Donna (Ed) Hogue, and Gail (Chris) Monger, 12 grandchildren, and 20 great-grandchildren, and 3 great-great-grandchildren.
Carl was a quiet man who traveled through life helping others and providing for his family. He was a great craftsman and his work will live on right on HWY 16 west of Upton. Carl will be remembered by many and missed by all.
Funeral services will be held July 2, 2014 at the Worden Funeral Home in Newcastle, Wyoming, with Bill Haley officiating. Honorary pallbearers are all his grandchildren and great-grandchildren.

To order memorial trees or send flowers to the family in memory of Mr. Carl Slagle, please visit our flower store.