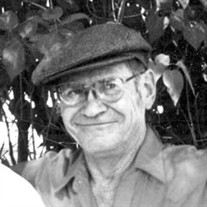 The youngest of four children born and raised on the Novak Ranch up past Four Corners Al started his life of adventures. His first transportation was a green and cream colored bicycle that Al of course had to fix to his liking. He added horns, mirrors, lights, mud flaps and anything else that would look good and still allow him to peddle back and forth into town to see his buddies.
He graduated to a 1936 Chevy at the age of 13 and continued being a Chevy/GM man from that day on until his passing. The "Bow Tie" had his heart!
He signed up with the National Guard in 1955 and after graduating was packed and ready to head to Guernsey but Al decided he wasn't going to go and went AWOL. He was then drafted into the United States Army in August of 1958. After basic training he was sent to Georgia where he drove all the Officers around in a 1957 Chevy.
In November of 1961 he married Bev Sachau and to that union children Suzette and Eddie were born, Suzette in June 1962, and Eddie in November 1964. 1965 brought many changes for the family as they packed up their 1949 Chevy truck "Bruno" and moved to Idaho. Al had a couple jobs there but eventually returned to Newcastle to drive trucks. He opened his first body shop in the late 1960's and later bought his own building and moved Novak's Body and Paint to its current location. Many amazing projects came out of that shop over the years. His ability to do spectacular body work and such interesting paint jobs made customers so happy and Al very proud. He then bought his over the road Kenworth truck and started Novak's Express. He traveled 48 states until he retired.
Al had many hobbies, including his race car driving at the local track in Newcastle in the late 1960's. He also enjoyed family time snowmobiling up North at the Novak Ranch as well as camping. He loved hunting from a very young age, looking forward to hunting season each year so he could spend time with his son Eddie hoping to get the "big one" which they did on more than one occasion.
Al's pride and joy were his two children, Suzette and Eddie. He was a very kind hearted gentle soul who will be missed by many.
The lord took Al home on November 5, 2015. Left to grieve his absence in their lives, but so grateful for having shared his, are his daughter Suzette Novak, Westminster, CO; son Eddie Novak (Susan), Sheridan, WY; grandchildren: Niki Rush (Michael), Preston Myrum (Jill), Kirsten Vigil (Joe) and Trey Novak. Great-grandchildren: Joziah, Izayah, Hunter and Cameryn. Longtime special friend Bev King; brother John Novak, Newcastle; and numerous nieces and nephews.
He was preceded in death by his children's mother Bev Sachau Novak his parents Margaret Novak-Miller and John Novak/Ed Miller, sisters Joan Huston and Joy Chittin as well as several aunts, uncles and cousins.
Services will be held at the First United Methodist Church on November 14, 2015 at 2:00 p.m., reception following the device and burial at the Greenwood Cemetery at 4:00 p.m.
Honorary Pallbearers: Trey Novak, Preston Myrum, Steve Mitich, Marty Chittin, Ben Morris, Max Morris, and John Huston.
Music: John and Kathy Daum; "Amazing Grace", and The Old Rugged Cross Cemetery Music; Luke Bryan "Drink a Beer".
A memorial has been set up in Al Novak's name.

To order memorial trees or send flowers to the family in memory of Mr. Albert Novak, please visit our flower store.