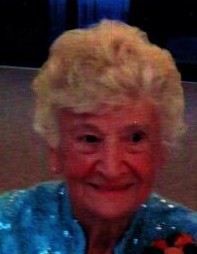 Mary Margaret Decker passed away September 22, 2019 in Cheyenne, Wyoming at Aspen Wind Assisted Living.  Mary Margaret Williams was born on August 21, 1927 to Orlo (OB) and Atta Juanita Williams in Fairfield, Iowa.  Her father was employed by the Burlington Northern Railroad and the family moved around Iowa with his assignments.  Eventually they moved to the Nebraska-Wyoming area with the railroad.  Mary attended grade school in Guernsey, Wyoming and graduated there in 1944.

She married Max Decker on November 20, 1945 in Oakland, California, where Max was training to be a corpsman with the Navy.  They remained in California while Max finished his training.  The war ended before Max was deployed and the couple returned to Guernsey.  Eventually the family moved to Newcastle in 1954 where Max opened Deckers Food Center.  Mary raised her six children and was a full-time homemaker.  She also participated in several organizations in the community.

Mary is survived by five of her children, Kathy (Decker) Levasseur of Cheyenne, WY; Danny Decker of Newcastle; Nancy (Decker) Douglas of Kalispell, Montana; Carol (Decker) Sylte of Sparks, Nevada; Kenny Decker of Casper, WY; she is also survived by 14 grandchildren and 25 great-grandchildren.  She was preceded in death by her parents, her son, Larry, and husband, Max. Memorials may be made in Mary’s name to benefit Alzheimer’s Research. Memorials and condolences may be sent in care of Meridian Mortuary 111 South Railroad Ave, Newcastle, WY 82701. Condolences may also be expressed at www.meridianmortuary.com

To order memorial trees or send flowers to the family in memory of Mary Decker, please visit our flower store.