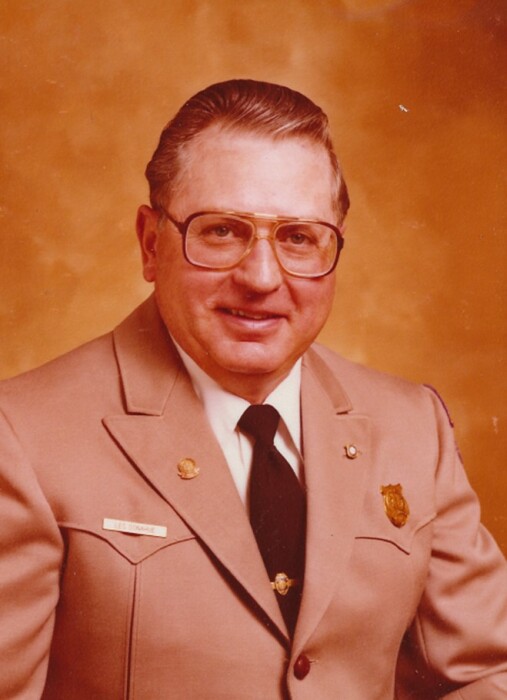 Leslie “Les” Donahue passed away November 27, 2021 in Riverton, WY at the age of 87.  Les was born in Cheyenne, Wyoming on  November 7, 1934,  to Pauline (Hilderman) and John Donahue.  He was raised in the Hawk Springs/Meridian area, along with his three brothers and one sister.  Les eventually moved to Cheyenne and started working for Greyhound in 1951.  It was during this time he met his future wife, Ruby Hendersen.  Ruby and Les were married March 27, 1955 and eventually became proud parents to Harold and Deborha.  In 1956, Les began a career with the State of Wyoming, starting as a custodian.  By 1958, he began working with Fish Division and became Game Warden in 1966, a position he held for 31 years.  His career took him to Ten Sleep, Casper and Newcastle. While residing in Newcastle, he served his community as a volunteer firefighter with the Newcastle Volunteer Fire Department.  In 1990, he joined the Upton Police Department, following time spent as a park ranger at Keyhole Reservoir until his retirement in 1992.   Les was a proud member of the Wyoming Game Wardens Association. Throughout his life, you could find him doing what he enjoyed the most, hunting and fishing in beautiful Wyoming. Les is survived by his wife, Ruby of Riverton; children, Harold Donahue of Riverton and Deborha Christopherson of Gillette; 4 grandchildren, 11 great-grandchildren, and 1 great-great grandchild. He was preceded in death by his grandparents, parents and all of his siblings.  Visitation will be held Friday, December 10, 4:00-7:00 p.m. at Meridian Mortuary.  Funeral services will be held Saturday, December 11,  at 10:00 a.m. at Meridian Mortuary. Burial will follow at Greenwood Cemetery in Upton, Wyoming. In lieu of flowers, memorials are suggested to benefit the Newcastle Volunteer Fire Department or the Bethlehem Lutheran Church of Moorcroft. C ondolences can be sent to Meridian Mortuary, 111 S. Railroad Ave., Newcastle, WY, 82701. Condolences may also be expressed at www.meridianmortuary.com .

To order memorial trees or send flowers to the family in memory of Leslie Donahue, please visit our flower store.