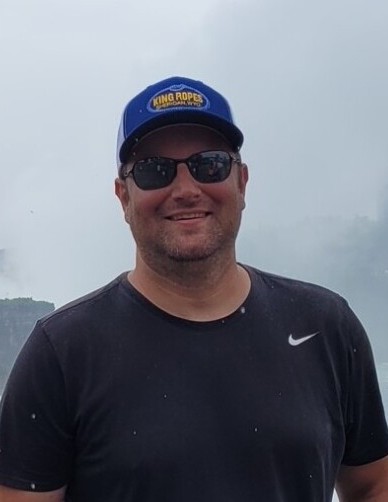 On Monday, January 3, 2022, Jason Scott Garhart passed away at the age of 37, at the Central Wyoming Hospice in Casper, WY, from an aggressive cancer.  Jason was a loving son, brother, and uncle.  Jason was born November 20, 1984, to Kevin and Sherry (Haglund) Garhart.  He graduated from Newcastle High School in 2003.  Jason never married nor had any kids.  Later, he went to work for Aaron and Brittany VanHorn at 360 Splicing, out of Gillette, WY.  Jason enjoyed hunting, camping, fishing, living on the ranch, and being with all his family and friends.  He also loved to go hiking on different trails in the Black Hills and just being outdoors in general.  Jason’s nephews and nieces were everything to him.  He would teach them so many things and loved to take them for rides on the 4-wheeler and the golf cart.  No matter where Jason was at, he always made sure to have a great time.  Jason had a way of being there for everyone, and he would always try to make everyone laugh.  Jason is survived by his parents Kevin and Sherry Garhart of Newcastle, WY; sister Tracy (John) Leonard of Newcastle, WY; grandma Patricia Haglund of Newcastle, WY; nephews Carson and Owen Leonard; nieces Ashlyn and Payton Leonard; many uncles, aunts, and cousins.  Jason is preceded in death by his grandpas, Richard Haglund and Donald Garhart, and his grandma, Barbara Garhart.  Condolences can be sent to Meridian Mortuary, 111 S. Railroad Ave., Newcastle, WY, 82701. Funeral services will be at 2:00 p.m., Saturday, January 8, 2022, at the First Baptist Church, 903 S. Summit Ave., in Newcastle.  Memorials may be made to the Salvation Army of Gillette, 620 N HWY 14-16, Gillette, WY, 82718. Condolences may be expressed at www.meridianmortuary.com .

To order memorial trees or send flowers to the family in memory of Jason Garhart, please visit our flower store.