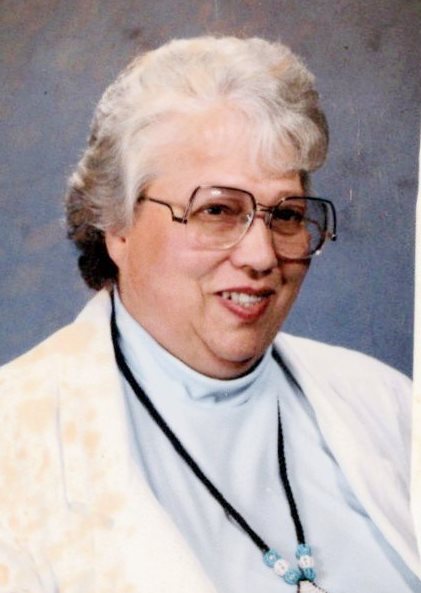 Born on the family ranch southwest of Newcastle, she was the daughter of John C. (Charley) Borgialli and Naomi Ruth (Van Sickel) Borgialli. Hazel was the third of six children and attended school at the Borgialli School, Lone Tree, Newcastle High School and received her teaching degree from the University of Wyoming.

At her first teaching job in Hulett she met the love of her life Lorin Dean Johnson, who was also teaching there. They were married on August 16, 1959. To this union one child was born, Lori Deane.

She taught Home Economics for 35 years in several towns throughout Wyoming including Hulett, Rock River, Pavillion, Basin and Sheridan. After retiring she joined Lori in operating the Four Corners Store & Diner and later the Four Corners Country Inn. She loved sewing, a skill that she acquired through 4-H. She enjoyed cooking for family gatherings and she was known for her candy making.

Hazel thought it was a shame that the old Boyd Church sat on her property, but wasn’t being used as a Church. So, she and Lori started a bible study there and later offered the use of the building to what is now the Country Church. Hazel was a member of the Church from the beginning.

She was proceeded in death by her husband, Lorin; parents Charley and Ruth; brothers Tom, Harry and Bill Borgialli.

Hazel is at peace with the Lord, who she loved so much. The family reunion in Heaven has begun and surely Lorin was waiting for her with yellow roses.

Funeral services will be held on April 2, 2022 at 10:00 a.m. at the Four Square Lighthouse Church in Newcastle, Wyoming. Interment will be at Greenwood Cemetery. Viewing will be one-hour before the funeral service.

In lieu of flowers, donations can be made to the Newcastle Ambulance Service. Memorials and condolences may be sent in care of Meridian Mortuary 111 South Railroad Ave, Newcastle, WY 82701. Condolence may also be expressed at www.meridianmortuary.com

To order memorial trees or send flowers to the family in memory of Hazel Johnson, please visit our flower store.