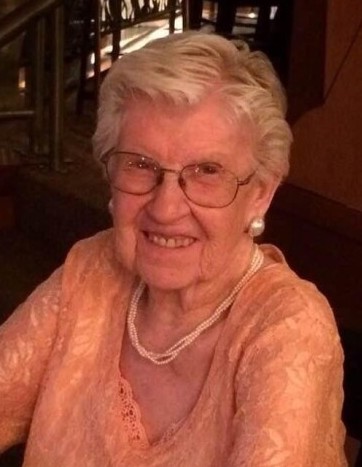 Grace Davis, resident of Newcastle, died Thursday, Nov 11, 2021.  Services will be held Monday, November 22, 2021 at 2:00 PM at the First United Methodist Church in Newcastle.  Rev. Ron Sample will officiate.  Grace was born Oct 21, 1925 to John and Charlotte Statler in Clareton, Wyoming.  She graduated from Newcastle High School in 1945.  She was given a war emergency teaching certificate and taught in a one-room school house from 1945-1946. Grace married Leland Davis, son of John and Gertrude Davis, on July 7, 1946.  They were married 31 years and had two daughters, Sharon Kay Davis Harmon and Kathleen Ann Davis Lockwood.  She joined the Methodist Church in 1944 and remained an active member her entire life.  Grace served as church Financial Secretary for 40 years and was the treasurer of the United Methodist Women for 39 years as well as serving on various committees and participating in church activities. Grace received a Quiet Disciple Award in 2010 from United Methodist District.   One of her favorite activities was making items for the annual church bazaar (including this year).  Grace lived and was active in the Weston County community her entire life.  She regularly submitted entries in the county fair and was a member of the Busy Beaver Extension Club for over 65 years where she received the 1992 Quealy Award.  She was a “Gray Lady” volunteer at the hospital and a Girl Scout leader.  Grace was active in Masonic Organizations and was a member of the Order of Eastern Star for over 50 years, serving as Worthy Matron as well as in other offices.  She was a member of the Past Worthy Matrons organization and Daughters of the Nile as well as served as a Guardian for Job’s Daughters.  Freida Lincoln and Grace started the first TOPS club in Newcastle over 45 years ago.  She became a KOPS in 1974 and she remained active in TOPS until her death.  Grace was also politically active serving as the county Election Judge for 20 years and was a state delegate to the 1980 Republican National Convention in Detroit. In 2007 she was the Beta Sigma Phi First Lady award recipient. After moving to Weston County Senior Services in 2007, she continued to be active in that community helping to organize and serve bereavement meals and coffees.  Grace is survived by one brother Dale Statler (Centralia, WA), one daughter, Kathleen and her husband Larry Lockwood (Broken Arrow, OK),  grandchildren, Larry and Cindy Lockwood (Dill City, OK), Nicole Stone (Broken Arrow, OK),  David Harmon (La Porte, IN), Connie Fitzgerald, Bryon Harmon and John Harmon (Casper WY),  multiple great-grandchildren including Nash White, Allie Giddens, McKinsey Gray,  Aaron Lockwood,  Adree Gray.  Makenzie Stone, Brooklynn Stone, Clarissa Harmon, Ethan Harmon, Leland Harmon, Stephanie Rogers, and Britttany Rogers,  and several great-great-grandchildren.  She was preceded in death by her husband Leland Davis, her daughter Sharon Harmon, her parents John and Charlotte Statler, six brothers and four sisters.  A memorial has been established to benefit the Weston County Senior Center. Memorials and condolences may be sent in care of Meridian Mortuary, 111 South Railroad Ave, Newcastle, WY 82701. Condolences may also be expressed at www.meridianmortuary.com.

To order memorial trees or send flowers to the family in memory of Grace Davis, please visit our flower store.