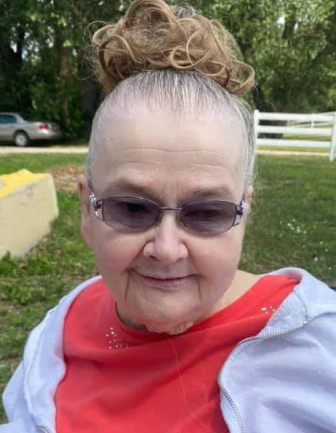 Gerry was born April 25, 1956 to Charles and Lavonne Clark.  She came home to Red Water near Spearfish, S.D.  She also lived in Moskee in the summer and the family eventually moved to Newcastle when she was about three.  She received some of her early education at Gertrude Burns School and later had an in-home tutor.  She also attended school in Thermopolis and college classes at Sheridan College.  Her next home was Billings, Montana where she resided in her own apartment for about 25 years.

She met her first challenge when she was born with cerebral palsy but never let that keep her from doing or trying whatever she wanted.  She liked to play the “Wahoo” marble game when she was younger.  She was also a 4-H club member and showed her horse “Velvet” at the county fair.  She spent many hours on her computer keeping in contact with family and friends.  While in Billings she worked for the college in the mail department delivering mail to the different departments.  She was also an annual volunteer for the Salvation Army as a Christmas season bell ringer and always participated in the yearly walk for MS.  Although her donations were never large, she always donated to St. Jude’s Children’s Hospital fund.  She loved the holidays, especially Christmas when there could never be too many decorations or lights.  She even left Christmas lights up and lit in her room at Weston County Manor the year around.

She had her share of medical issues throughout her life.   In November of 2011 she developed a brain bleed which resulted in her moving from Billings back to Newcastle where she lived the remainder of her life but never gave up hope of returning to Billings.

She is preceded in death by her parents, Charles and Lavonne Clark, grandparents Nate and Hilma Clark and Bun and Betty Conger and many aunts and uncles.  She is survived by her sister, Shirley Cole and husband Larry, nephews Scott Johnson (Terra Kennah), great nephews Christopher Johnson and Tanner Johnson, all of Newcastle, nephew Steven Johnson of Wheatland, aunts Jackie Dale and Angela Ross and uncle John Ross of Sturgis, SD and many cousins.

Funeral services for Gerry will be held Thursday, August 19, 2021 at 2:00 p.m. at the Meridian Mortuary. Burial will follow at Greenwood Cemetery, Newcastle.

Memorials may be made in Gerry’s name to St. Jude’s Children’s Hospital.  Memorials and condolences may be sent in care of Meridian Mortuary, 111 S. Railroad Ave. Newcastle, WY 82701. Condolences may also be expressed at www.meridianmortuary.com

To order memorial trees or send flowers to the family in memory of Gerry Clark, please visit our flower store.